Study finds weather-related disasters may have accelerated aging in monkeys

Hurricane Maria, which struck Puerto Rico in 2017, may have accelerated the aging process in rhesus monkeys living on the region’s Cayo Santiago island. 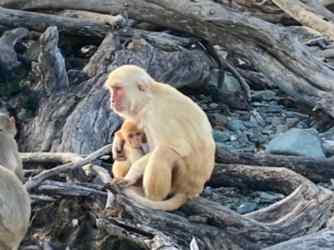 Hurricane Maria, which struck Puerto Rico in 2017, may have accelerated the aging process in rhesus monkeys living on the region’s Cayo Santiago island, a team of scientists has concluded. Its findings suggest that an increase in adverse weather events may lead to biologically adverse consequences for those who experience them.

“While the short-term consequences of natural disasters are well-known, we have little idea what the long-term impacts of natural disasters are on human health and disease progression” says James Higham, an associate professor in New York University’s Department of Anthropology and one of the authors of the paper, which appears in the Proceedings of the National Academy of Sciences (PNAS). “Our study shows that natural disasters have the potential to accelerate the aging process, which is important because age is the primary predictor of risk from most non-infectious diseases.”

Cayo Santiago, also known as “Monkey Island”, is home to over 1,000 free-ranging monkeys, which have been subjects of scientific research since the 1930s. After Hurricane Maria devastated the island, Higham and his colleagues worked to assess and repair the damage.

In subsequent years, a collaborative group of researchers from NYU, Arizona State University, the University of Washington, the Caribbean Primate Research Center, the University of Pennsylvania, and the University of Exeter  have studied Cayo Santiago’s rhesus monkeys—or rhesus macaques—in order to better understand the impact of natural disasters on populations. In 2020, they discovered how the monkeys formed new social connections in the wake of the hurricane, findings that were reported in the journal Current Biology.

In the PNAS research, the group of researchers sought to better understand if natural disasters could affect the aging process—specifically, by studying changes in the expression of the monkeys’ genes.

The results showed that the macaques exhibited a change in expression of 4 percent of immune-cell-expressed genes—changes that were very similar to the changes in gene expression that occur during aging, indicating that the hurricane may have accelerated aging of the immune system. In terms of life span, the hurricane genetically aged the macaques an average of nearly two years, corresponding to seven to eight years of a human life.

“From this study, we have measured the molecular changes associated with aging, including disruptions of protein-folding genes, greater inflammatory immune cell marker gene expression and older biological aging,” notes ​​lead author Marina Watowich, a graduate student at the University of Washington and research scientist at ASU.

“While everyone ages, we don’t all age at the same rate, and our lived experiences, both negative and positive, can alter this pace of aging,” says author Noah Snyder-Mackler, an assistant professor at Arizona State University’s School of Life Sciences. “One negative life experience, surviving an extreme event, can lead to chronic inflammation and the early onset of some age-related diseases, like heart disease. But we still don’t know exactly how these events get embedded in our bodies, leading to negative health effects that may not show up until decades after the event itself.”

The researchers add that only 2.75 percent of the macaque population died in the immediate aftermath of the storm—and that, in the year after the hurricane, there was no difference in survival. However, the PNAS study shows that severe weather events—which are becoming more frequent and damaging due to climate change—may lead to biologically detrimental consequences for those living through them.