Researchers have for the first time defined the fundamental and practical limits of spaceplates. 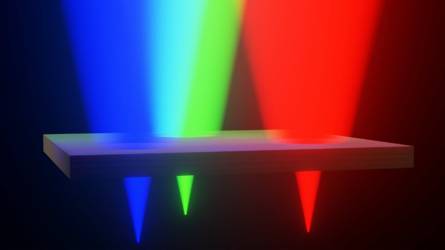 Conceptual image of a spaceplate reducing the distance at which light is focused over a broad range of wavelengths.

Engineers working to miniaturize optical systems for modern electronics have seen great success when it comes to the most familiar components, the lenses and optical sensors. It’s been more challenging to reduce the size of the third component of an optical system, the free space between the lens and the sensor needed for light waves to achieve focus.

Researchers have been developing technology to replace some or all of that free space with a thin, transparent device known as a spaceplate. Now, Cornell researchers led by doctoral student Kunal Shastri and assistant professor Francesco Monticone, together with their collaborators, have for the first time defined the fundamental and practical limits of spaceplates in a paper published in the journal Optica titled, “To what extent can space be compressed? Bandwidth limits of spaceplates.”

“In the quest to miniaturize optical systems,” Shastri explained in the paper, “an often overlooked aspect is the large free-space volume between the detector and the lens, or between lenses, which is essential to allow light to acquire a distance-dependent and angle-dependent phase and achieve, for example, focusing at a certain distance.”

The length of the free space behind a lens is critical to the lens’ ability to focus an image onto the sensor, or onto film, as was the case before digital cameras. The free space allows light waves coming from different directions after the lens to propagate and acquire enough phase to converge at the focal spot: the sensor. This is one reason why camera lenses designed to focus on and magnify a faraway subject, for example telephoto lenses, are so long. Spaceplates are designed to mimic the optical phase response of free space over a much smaller length.

Monticone, working with former doctoral student Aobo Chen, had previously used computer simulations to design scalable spaceplates and to demonstrate how they would work in an optical system. This new work expands on that research by defining the limits of a spaceplate’s ability to maximize three fundamental optical parameters: compression ratio, numerical aperture and bandwidth.

“It's very complicated to meet these three goals at the same time,” Monticone explained, “having maximal compression ratio and, at the same time, also maximizing numerical aperture and bandwidth. In this paper we try to clarify the general physical mechanism behind any space compression effect, regardless of how you implement the spaceplate.”

Prior research into spaceplate technology had yielded functional but impractical or inefficient designs that worked for a single color, or for a small range of angles, or needed to be immersed in a material with a high refractive index, such as oil. These devices could not be used to miniaturize typical optical systems.

Shastri explained that the boundaries they define in this newly published paper will tell other engineers working in the field how far or how close they are to the global fundamental limits of the spaceplate devices they’re designing. “And that's, I think, very valuable,” Shastri said. “That's the reason why we wrote this paper.”

Spaceplates can be designed using the same materials that conventional imaging systems are made from, whether it’s layers of glass and other transparent materials with different refractive indices, a patterned surface, or a photonic crystal slab – any structure that provides a sufficient contrast in refractive index going from one material to the next. They key factor is that the spaceplate must be highly transmissive; you don't want it to absorb light.

“In the simplest possible implementation,” Monticone said, “a spaceplate could be fabricated as a stack of layers, and the layers would have at least two different refractive indices. By optimizing the thickness and the spacing, you can optimize the optical response.”

Applications of spaceplate technology are not limited to cameras. Spaceplates could miniaturize projectors, telescopes, even antennas making use of a wider range of the electromagnetic spectrum. Monticone and Shastri are eager to move beyond the computer models they have been using and design physical experiments with manufactured spaceplates.

“The next step will be the experimental demonstration of a spaceplate working in free space at optical frequencies,” Monticone said. “Using computational design methods, we will look to optimize spaceplates to work as close as possible to our fundamental limits. Perhaps we’ll be able to combine a flat lens and a spaceplate within a single device, realizing ultra-thin, monolithic, planar optical systems for a variety of applications.”