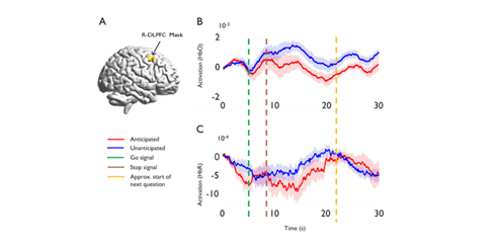 Figure showing the location of the right dorsolateral prefrontal cortex, as well as event-related average activation plots for the oxyhemoglobin and deoxyhemoglobin signals.

“We’ve always known that stutterers anticipate stuttering, but no one has explored how the brain processes anticipation,” says NYU Steinhardt Assistant Professor Eric S. Jackson, lead author of the study. “This represents a significant gap in the literature, likely due to anticipation being a primarily covert phenomenon.”

The researchers studied 44 participants (22 stutterers and 22 non-stutterers) who were tasked with producing words that included anticipated words (words participants identified as likely to be stuttered) and unanticipated words. The participants’ neural activity was measured during a five-second window preceding speech using a brain imaging technology called functional near-infrared spectroscopy (fNIRS).

The researchers found that activation in the R-DLPFC increased when participants anticipated stuttering (demonstrated by changes in blood flow). Additionally, anticipated words were associated with reduced connectivity between the R-DLPFC and the right supramarginal gyrus (R-SMG)—another part of the brain in the cognitive control network.

“The results show that the R-DLPFC is activated in response to anticipated words, and that anticipation is associated with destabilization in the broader cognitive control network. This work provides a foundation for developing a brain-based account of this critical phenomenon, and also may have important clinical implications related to targeted neuromodulation as a component of therapy for stutterers,” said Jackson.