Researchers have provided the first documentation that dogs’ sense of smell is integrated with their vision and other unique parts of the brain, shedding new light on how dogs experience and navigate the world. 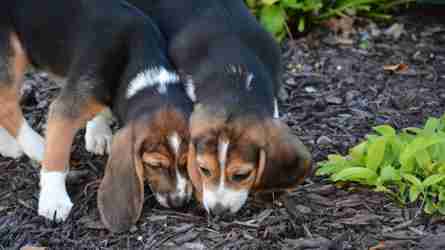 Michael Carroll/CVM. Cornell researchers have provided the first documentation that dogs’ sense of smell is integrated with their vision and other unique parts of the brain.

Cornell researchers have provided the first documentation that dogs’ sense of smell is integrated with their vision and other unique parts of the brain, shedding new light on how dogs experience and navigate the world.

“We’ve never seen this connection between the nose and the occipital lobe, functionally the visual cortex in dogs, in any species,” said Pip Johnson, assistant professor in the Department of Clinical Sciences in the College of Veterinary Medicine and senior author of “Extensive Connections of the Canine Olfactory Pathway Revealed by Tractography and Dissection,” published July 11 in the Journal of Neuroscience.

“It makes a ton of sense in dogs,” she said. “When we walk into a room, we primarily use our vision to work out where the door is, who’s in the room, where the table is. Whereas in dogs, this study shows that olfaction is really integrated with vision in terms of how they learn about their environment and orient themselves in it.”

Erica Andrews, a former analyst in Johnson’s lab, is the paper’s first author and currently works in canine aging research.

Johnson and her team performed MRI scans on 23 healthy dogs and used diffusion tensor imaging, an advanced neuroimaging technique, to locate the dog brain’s white matter pathways, the information highways of the brain. They found connections between the olfactory bulb and the limbic system and piriform lobe, where the brain processes memory and emotion, which are similar to those in humans, as well as never-documented connections to the spinal cord and the occipital lobe that are not found in humans.

“It was really consistent,” Johnson said. “And size-wise, these tracts were really dramatic compared to what is described in the human olfactory system, more like what you’d see in our visual systems.”

Tractography, a 3D-modeling process, allowed Johnson and her team to map and virtually dissect the white matter tracts. The findings in the digital images were later confirmed by a co-author and white matter expert at Johns Hopkins University.

Johnson said the research corroborates her clinical experiences with blind dogs, who function remarkably well. “They can still play fetch and navigate their surroundings much better than humans with the same condition,” Johnson said. “Knowing there’s that information freeway going between those two areas could be hugely comforting to owners of dogs with incurable eye diseases.”

Identifying new connections in the brain also opens up new lines of questioning. “To see this variation in the brain allows us to see what’s possible in the mammalian brain and to wonder – maybe we have a vestigial connection between those two areas from when we were more ape-like and scent-oriented, or maybe other species have significant variations that we haven’t explored,” Johnson said.

Johnson plans to examine the olfactory system’s structure in the brains of cats and horses, which aligns with the broader goals of her research program – to leverage the most advanced imaging techniques, used commonly in human clinical research, to better understand animal brain physiology and disease.