Study finds how does radiation travel through dense plasma 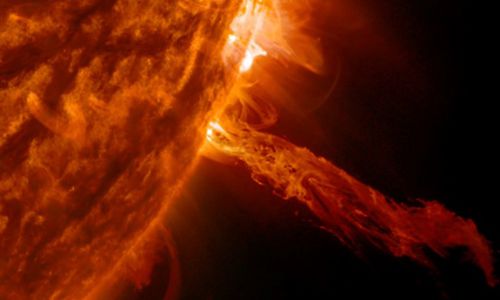 A NASA image of plasma bursting from the sun. Plasma—a hot soup of atoms with free moving electrons and ions—is the most abundant form of matter in the universe, found throughout our solar system in the sun and other planetary bodies. A new study from University of Rochester researchers provides experimental data about how radiation travels through dense plasmas, which will help scientists to better understand planetary science and fusion energy. (NASA image)

Most people are familiar with solids, liquids, and gases as three states of matter. However, a fourth state of matter, called plasmas, is the most abundant form of matter in the universe, found throughout our solar system in the sun and other planetary bodies. Because dense plasma—a hot soup of atoms with free-moving electrons and ions—typically only forms under extreme pressure and temperatures, scientists are still working to comprehend the fundamentals of this state of matter. Understanding how atoms react under extreme pressure conditions—a field known as high-energy-density physics (HEDP)—gives scientists valuable insights into the fields of planetary science, astrophysics, and fusion energy.

One important question in the field of HEDP is how plasmas emit or absorb radiation. Current models depicting radiation transport in dense plasmas are heavily based on theory rather than experimental evidence.

In a new paper published in Nature Communications, researchers at the University of Rochester Laboratory for Laser Energetics (LLE) used LLE’s OMEGA laser to study how radiation travels through dense plasma. The research, led by Suxing Hu, a distinguished scientist and group leader of the High-Energy-Density Physics Theory Group at the LLE and an associate professor of mechanical engineering, and Philip Nilson, a senior scientist in the LLE’s Laser-Plasma Interaction group, provides first-of-its-kind experimental data about the behavior of atoms at extreme conditions. The data will be used to improve plasma models, which allow scientists to better understand the evolution of stars and may aid in the realization of controlled nuclear fusion as an alternative energy source.

“Experiments using laser-driven implosions on OMEGA have created extreme matter at pressures several billion times the atmospheric pressure at Earth’s surface for us to probe how atoms and molecules behave at such extreme conditions,” Hu says. “These conditions correspond to the conditions inside the so-called envelope of white dwarf stars as well as inertial fusion targets.”

When the plasma is bombarded with x-rays, the electrons in the atoms “jump” from one energy level to another by either emitting or absorbing photons of light. A detector measures these changes, revealing the physical processes that are occurring inside the plasma, similar to taking an x-ray diagnostic of a broken bone.

A break from conventional theory

The researchers’ experimental measurements indicate that, when radiation travels through a dense plasma, the changes in atomic energy levels do not follow conventional quantum mechanics theories often used in plasma physics models—so-called “continuum-lowering” models. The researchers instead found that the measurements they observed in their experiments can be best explained using a self-consistent approach based on density-functional theory (DFT). DFT offers a quantum mechanical description of the bonds between atoms and molecules in complex systems. The DFT method was first described in the 1960s and was the subject of the 1998 Nobel Prize in Chemistry.

“This work reveals fundamental steps for rewriting current textbook descriptions of how radiation generation and transport occurs in dense plasmas,” Hu says. “According to our experiments, using a self-consistent DFT approach more accurately describes the transport of radiation in a dense plasma.”
Says Nilson, “Our approach could provide a reliable way for simulating radiation generation and transport in dense plasmas encountered in stars and inertial fusion targets. The experimental scheme reported here, based on a laser-driven implosion, can be readily extended to a wide range of materials, opening the way for far-reaching investigations of extreme atomic physics at tremendous pressures.”

Researchers from Prism Computational Sciences and Sandia National Laboratories and additional researchers from the LLE, including physics graduate students David Bishel and Alex Chin, also contributed to this project.