Study details how some fish cope with parasites 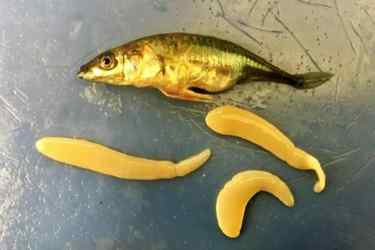 A susceptible threespine stickleback fish is shown alongside three tapeworms from its abdominal cavity. Resistant fish are able to kill tapeworms or limit their growth with scar-tissue like fibrosis. Threespine stickleback fish have become a model for studying evolution as their marine ancestors colonized freshwater lakes on Vancouver Island ~11,000 years ago. Credit: Amanda Hund, University of Minnesota.

They thrive everywhere from bustling cities to remote rainforests — even in our own backyards. Pervasive and unapologetic mooches, parasites rely on other organisms for their survival.

How parasites impact their host varies broadly, from causing minor irritation to death. Even among host populations that are closely related, the response to an infection by a parasite can differ dramatically. Frequently, populations are classified as either “resistant” or “susceptible” to a parasite. However, this simplified framework doesn’t tell the whole story.

In a recent study published in Evolution Letters, a team of researchers led by Amanda Hund, a postdoctoral researcher in the University of Minnesota’s College of Biological Sciences, details how parasite resistance in hosts arises.

“Mature tapeworms can make it difficult for the fish to swim or reproduce. It can even manipulate the fish’s behavior to increase the odds that it will be eaten by a bird, where the tapeworm reproduces,” says Hund.

The interaction between a host and a parasite can be broken down into several different steps. Understanding where populations differ in these steps shows scientists where evolution is happening and often determines whether the population is resistant or susceptible to the parasite. Researchers found the ability to detect a parasite and launch an immune response quickly is the most important factor in determining if the host can resist the parasite or limit parasite growth. “Applying this approach to more hosts and parasites will allow us to better understand why parasite resistance varies and how it evolves,” says Hund.

The findings could have further implications for human conditions that generate scar tissue which is similar to the mesh of tissue that resistant fish use to trap the parasite. Hund’s collaborator Daniel Bolnick, a professor at the University of Connecticut, is continuing work in this system to better understand how it connects with human diseases such as cystic fibrosis and liver fibrosis.

“We found naturally evolved genetic variation in how quickly fish initiate and recover from a self-harming immune response. That same harmful immune response exists in humans, so the discoveries in fish have the potential to teach us how our own bodies might recover faster from damaging conditions” says Bolnick.