Findings could lead to advances in plant breeding, human genetics 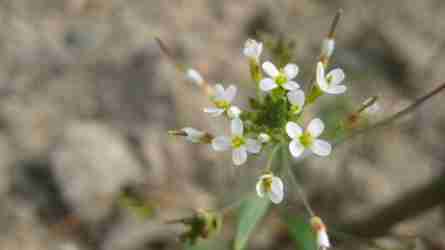 Studying the genome of thale cress, a small flowering weed, led to a new understanding about DNA mutations. (Pádraic Flood)

Simple roadside weed may hold the key to understanding and predicting DNA mutation, according to new research from University of California, Davis, and the Max Planck Institute for Developmental Biology in Germany.

The findings, published in the journal Nature, radically change our understanding of evolution and could one day help researchers breed better crops or even help humans fight cancer.

Mutations occur when DNA is damaged and left unrepaired, creating a new variation. The scientists wanted to know if mutation was purely random or something deeper. What they found was unexpected.

“We always thought of mutation as basically random across the genome,” said Grey Monroe, an assistant professor in the UC Davis Department of Plant Sciences who is lead author on the paper. “It turns out that mutation is very non-random and it’s non-random in a way that benefits the plant. It’s a totally new way of thinking about mutation.”

Researchers spent three years sequencing the DNA of hundreds of Arabidopsis thaliana, or thale cress, a small, flowering weed considered the “lab rat among plants” because of its relatively small genome comprising around 120 million base pairs. Humans, by comparison, have roughly 3 billion base pairs.

Work began at Max Planck Institute where researchers grew specimens in a protected lab environment, which allowed plants with defects that may not have survived in nature be able to survive in a controlled space.

Sequencing of those hundreds of Arabidopsis thaliana plants revealed more than 1 million mutations. Within those mutations a nonrandom pattern was revealed, counter to what was expected.

“At first glance, what we found seemed to contradict established theory that initial mutations are entirely random and that only natural selection determines which mutations are observed in organisms,” said Detlef Weigel, scientific director at Max Planck Institute and senior author on the study.

Instead of randomness they found patches of the genome with low mutation rates. In those patches, they were surprised to discover an over-representation of essential genes, such as those involved in cell growth and gene expression.

“These are the really important regions of the genome,” Monroe said. “The areas that are the most biologically important are the ones being protected from mutation.”

The areas are also sensitive to the harmful effects of new mutations. “DNA damage repair seems therefore to be particularly effective in these regions,” Weigel added.

Plant evolved to protect itself

The scientists found that the way DNA was wrapped around different types of proteins was a good predictor of whether a gene would mutate or not. “It means we can predict which genes are more likely to mutate than others and it gives us a good idea of what’s going on,” Weigel said.

The findings add a surprising twist to Charles Darwin’s theory of evolution by natural selection because it reveals that the plant has evolved to protect its genes from mutation to ensure survival.

“The plant has evolved a way to protect its most important places from mutation,” Weigel said. “This is exciting because we could even use these discoveries to think about how to protect human genes from mutation.”

Knowing why some regions of the genome mutate more than others could help breeders who rely on genetic variation to develop better crops. Scientists could also use the information to better predict or develop new treatments for diseases like cancer that are caused by mutation.

“Our discoveries yield a more complete account of the forces driving patterns of natural variation; they should inspire new avenues of theoretical and practical research on the role of mutation in evolution,” the paper concludes.