Study addresses the causes of eye colour variation in primates

Scientists discover that this diversity is partly due to lighting differences in their habitats. 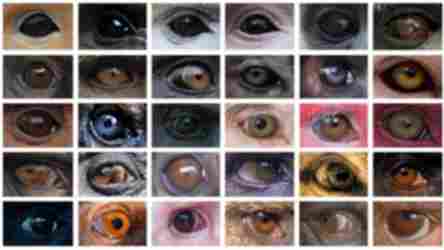 Some of the images measured and analysed in the study, picturing the diversity in colour and forms. (Credit: Juan Olvido Perea-García)

Have you ever wondered why some people have lighter eyes than others? Differences in iris colouration have traditionally been explained as a result of sexual selection, but a recent study led by researchers from the Department of Biological Sciences at the National University of Singapore (NUS) Faculty of Science revealed that this is partly due to differences in lighting in the habitats of primate species.

For over 20 years, studies focused on explaining variation in primate eye colouration have exclusively focused on eyes as visual signals for inter and intra-specific communication. This idea, however, has received little support from experimental studies in species other than humans. Other suggestions, like eye pigmentation patterns being used in camouflage against predators, have also received limited support.

Even though eyes help us navigate the world thanks to light entering that organ, the idea that eye colour diversity may have evolved due to different qualities of light being present in different habitats was never seriously considered.

Now, researchers from NUS, together with collaborators from Republic Polytechnic, the University of St Andrews and Leiden University, have discovered that ambient light is an important factor determining eye colour across primate species. Postdoctoral researcher Dr Juan O. Perea-García, former PhD student of Professor Antónia Monteiro from NUS Department of Biological Sciences, suggested that this pattern may also explain differences in eye colour in human populations.

Their findings were published in Scientific Reports on 15 October 2022.

Seeing eyes in a new light

The research team collected hundreds of photographs from 77 primate species and measured the brightness and colour of different parts of their eyes. These photographs were found online, taken by the researchers, or by wildlife photographer Mogens Trolle. The researchers found that species living farther from the equator tend to have lighter conjunctiva (the tissue surrounding the iris), not unlike skin pigmentation in humans. Iris colour also shifted to become greener or bluer, as populations were found farther away from the equator, where irises tend to be browner.

“We have known for a long time that humans are exceptionally good at using their eyes in communicating with others, so many researchers had tried to find these same functions in primates. Understanding that ambient light, instead, may have an impact in the appearance of primate eyes brings a fresh perspective to this field,” said Dr Perea-García.

Beauty is in the eyes of the beholder

Most previous studies addressing diversity in iris colour in humans (brown, blue, green, etc.) revolved around the idea that colour was sexually selected. This was also the preferred explanation for diversity in skin pigmentation, until evidence tipped the balance towards protection from UV rays.

Seeing that differences in eye colour could be explained by changes in lighting typical of the natural ranges of primate species suggests that iris colour may have been selected by environmental conditions in humans, similar to skin pigmentation.

Prof Monteiro said, “What is exciting about this research is that by using the comparative method in evolutionary biology, we find that many species of primates independently evolved bluer eyes at higher latitudes, just like what happened within our own species. This helps tip the balance towards an ecological, rather than sexual selection explanation, for the evolution of blue eye colour in humans.”

Blue light helps us tune our circadian clock to adjust energy levels by stimulating special receptors in our retina. In geographic regions with less light, bluer irises may allow more blue light to reach those special receptors, thus boosting energy levels. This would help explain why blue eyes evolved and spread only far away from the equator.

“Even though this study provides a possible solution to the puzzle of iris colour variation, many mysteries remain – for example, why some species living in the equator sometimes have striking blue eyes, like the brown spider monkey (Ateles hybridus), or why some species with similar ranges have different levels of conjunctival pigmentation, like the chimpanzee and bonobo, remains to be addressed,” shared Dr Perea-García.