A University of Chicago undergraduate, however, was able to tease some clues out of data that most scientists had overlooked. 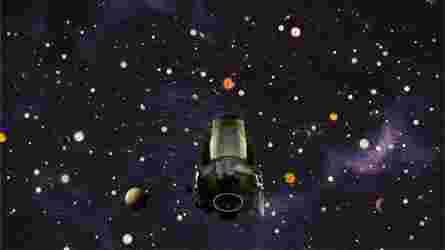 In the past decades, the number of known exoplanets—planets in other solar systems—has skyrocketed. But we’re still in the dark about a number of details, including how massive they are and what they’re made up of.

A University of Chicago undergraduate, however, was able to tease some clues out of data that most scientists had overlooked.

Jared Siegel, B.S.’22, spent six months analyzing data taken by a NASA spacecraft. Some of this data was full of statistical noise, making it hard to differentiate planets from other phenomena; but Siegel and his advisor, astrophysicist Leslie Rogers, were able to extract useful information about these planets, setting an upper bound on how massive they could be.

“As the results kept taking shape, they just got more exciting,” said Siegel, who graduated this spring.

The results of the research for Siegel’s undergraduate thesis were accepted to the Astrophysical Journal.

Siegel and Rogers were combing through the data from a NASA space telescope called Kepler, which spent nine years tracking the tiny blips in the light from faraway stars. These blips can occur as a planet passes in front of the star, temporarily dimming its light.

Many scientists had already analyzed this data, finding evidence for more than 2,600 exoplanets. But Siegel and Rogers wondered if there was a way to use statistical methods to tease out even more insights.

Their approach hinged on the fact that the Kepler telescope has found many stars that appear to have multiple planets around them—just like Earth and its sister planets around the sun. The tug of these planets’ gravity will slightly alter each other’s orbits, compared to how they would move if there was just one planet around a star. The more massive the planets, the stronger these perturbations are.

Siegel and Rogers reasoned that they could use this fact to say something about how massive some of the planets could possibly be.

“If we know there are multiple planets in a system but we don’t see big perturbations to the transit times, we know the planets can’t be particularly massive,” explained Siegel. “For example, we could say they’re likely not Jupiter-mass, because then they’d be pulling on each other in noticeable ways.”

They applied this logic to a sample of 170 planets in 80 different star systems. For about 50 of those planets, they were able to set an upper bound on the mass of the planet.

The information also helps scientists better understand the entire population of exoplanets. “We really want to know how many planets in a given mass range are likely to be rocky, or waterworlds, or gas planets,” said Rogers.

The biggest challenge of the study was accounting for the noise in the data, the scientists said.

“Many of these stars are very dim and far away,” Siegel explained. “It can be hard to disentangle the planet signal itself—there is a ton of noise from the stars having eruptions or sunspots, or instrumental issues. Maybe the entire system is on an incline relative to us. You have to take all these possibilities into account, so we spent a lot of time thinking about the ways that data could be messy.”

It was an enlightening experience for Siegel, who started doing research with faculty scientists during the winter of his first year at the University, but had not yet been at the helm.

“I think, especially as an undergrad, there’s always that desire to find the answer in the back of the textbook. But with this kind of research, you can’t,” said Siegel. “But ultimately, as it became more apparent that this group of stars could help inform our understanding of the entire rest of the population, it just got more and more exciting.”

“It’s very fulfilling as an advisor to see a student work through the non-linear path towards finding an interesting problem to work on and ultimately make a novel contribution to the characterization of planets,” said Rogers.

Siegel is now studying astronomy as a first-year graduate student at Princeton, where he is a National Science Foundation Research Fellow.