Strong adhesion thanks to cavitation bubbles

Researchers have discovered that they can stick hydrogel plasters to the skin very effectively using ultrasound. 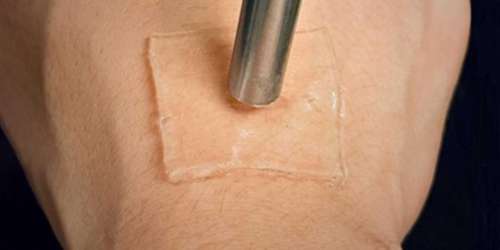 Ultrasound can be used to anchor the gel patch strongly to the skin.  (Photograph: Ran Huo & Jianyu Li, McGill University)

These days, hydrogel plasters are often used in wound care and for attaching wearable electronics to the skin. But these plasters don’t adhere to the skin particularly strongly, especially if the skin is wet.

A team of Canadian researchers led by Jianyu Li of McGill University have now discovered that these plasters can be attached very firmly and lastingly to the skin using ultrasound. What’s more, by varying the intensity of the ultrasound waves, the researchers can precisely control how firmly the hydrogel plasters stick to skin and other tissue.

But precisely why ultrasound helps achieve such strong bonds was a mystery to the Canadian researchers – a mystery that has now been partially solved by Outi Supponen, Professor of Multiphase Fluid Dynamics at ETH Zurich, and her postdoctoral researcher Claire Bourquard. The study conducted by the two research groups was published recently in the journal Science.

The reason the gel plasters adhere so well is that applying ultrasound creates special bubbles, known as cavitation bubbles, within the adhesive on the underside of the hydrogel. The greater the intensity of the ultrasound, the greater the number and size of the bubbles. These bubbles then immediately implode, causing each one to morph within milliseconds into a mini-​jet that shoots towards the surface of the skin, where they ram molecular components of the adhesive into the epidermis like a jackhammer. This is how the plaster gets firmly attached. “The principle behind this strong bond is cavitation – a purely mechanical process,” Supponen says.

What scientists mean by cavitation is the formation and collapse of vapour-​filled bubbles in liquids. When the bubbles implode, they release large amounts of energy. For example, cavitation occurs around objects that move very fast in liquids – such as the propellor of a ship or the turbines of hydroelectric power plants. Since the energy released when the bubbles collapse can badly damage these objects, cavitation should be avoided as far as possible in these applications.

“If we can learn how to apply cavitation energy in a controlled manner, we could use it to our advantage,” Supponen says. She adds that the tests on rats show that affixing hydrogel plasters using ultrasound is harmless. “The ultrasound-​induced cavitation in the adhesive didn’t damage the animals’ skin at all.”

Possible applications for the ultrasound “bonding technique” include plasters that administer vaccines, cancer medications or insulin through the skin.