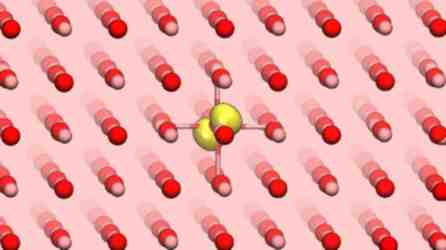 One of the many peculiarities of quantum mechanics is that particles can also be described as waves. A common example is the photon, the particle associated with light.

In ordered structures, known as crystals, electrons can be seen and described as waves that spread across the entire system – a rather harmonious picture. As electrons move through the crystal, ions – atoms carrying a negative or positive charge — are periodically arranged in space.

Now, if we were to add an extra electron to the crystal, its negative charge could make the ions around it move away from their equilibrium positions. The electron charge would localize in space and couple to the surrounding structural – “lattice” – distortions of the crystal, giving rise to a new particle known as a polaron.

“Technically, a polaron is a quasi-particle, made up of an electron “dressed” by its self-induced phonons, which represent the quantized vibrations of the crystal,” says Stefano Falletta at EPFL’s School of Basic Sciences. He continues: “The stability of polarons arises from a competition between two energy contributions: the gain due to charge localization, and the cost due to lattice distortions. When the polaron destabilizes, the extra electron delocalizes over the entire system, while the ions restore their equilibrium positions.”

Working with Professor Alfredo Pasquarello at EPFL, they have published two papers in Physical Review Letters and Physical Review B describing a new approach for solving a major shortcoming of a well-established theory that physicists use to study the interactions of electrons in materials. The method is called density functional theory or DFT, and is used in physics, chemistry, and materials science to study the electronic structure of many-body systems like atoms and molecules.

“In our work, we introduce a theoretical formulation for the electron self-interaction that solves the problem of polaron localization in density functional theory,” says Falletta. “This gives access to accurate polaron stabilities within a computationally-efficient scheme. Our study paves the way to unprecedented calculations of polarons in large systems, in systematic studies involving large sets of materials, or in molecular dynamics evolving over long time periods.”