Spinning is key for line-dancing electrons in iron selenide 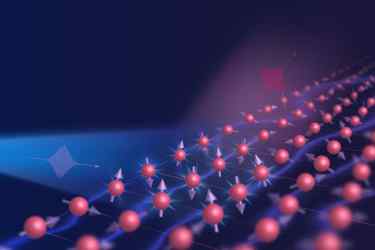 Rice University quantum physicists are part of an international team that has answered a puzzling question at the forefront of research into iron-based superconductors: Why do electrons in iron selenide dance to a different tune when they move right and left rather than forward and back?

Spin is the property of electrons related to magnetism, and the researchers discovered spins in iron selenide begin behaving in a directionally dependent way at the same time the material begins exhibiting directionally dependent electronic behavior, or nematicity. The team’s results were published online this week in Nature Physics.

Whether nematicity helps or hinders the onset of superconductivity is unclear. But the results of the high-energy spin experiments at PSI’s Swiss Light Source are a surprise because iron selenide is the only iron-based superconductor in which nematicity occurs in the absence of a long-range magnetic ordering of electron spins.

“Iron selenide has something special going for it,” said Rice study co-author Qimiao Si, who, like Dai, is a member of the Rice Quantum Initiative. “Being nematic without long-range magnetic order provides an extra knob to access the physics of the iron-based superconductors. In this work, the experiment uncovered something truly striking, namely that high-energy spin excitations are dispersive and undamped, meaning they have a well-defined energy-versus-momentum relationship.”

In all iron-based superconductors, iron atoms are arranged in 2D sheets that are sandwiched between top and bottom sheets of other elements, selenium in the case of iron selenide. The atoms in the 2D iron sheets are spaced in checkerboard fashion, exactly the same distance from one another in both the left-right and forward-back directions. But as the materials are cooled near the point of superconductivity, the iron sheets undergo a slight structural shift. Instead of exact squares, the atoms form oblong rhombuses like baseball diamonds, where the distance from home plate to second base is shorter than the distance from first to third base. Electronic nematicity occurs along with this shift, taking the form of increased or decreased electrical resistance or conductivity only in the direction of home-to-second or first-to-third.

While structural nematicity was known to exist in iron selenide, a property known as twinning made it impossible to measure accurately until a 2019 breakthrough by Dai, Lu and study co-author Tong Chen, a former graduate student in Dai’s lab who graduated in 2021.

In iron-based superconductors, twinning occurs when thin sheets of the materials are stacked and the iron layers in the sheets are misaligned. Imagine 100 baseball diamonds stacked one atop the other, with the line between home plate and second base pointing in a random direction in each layer. To accurately measure nematicity, all the layers had to be aligned.

Iron selenide is a soft material that easily deforms, but Chen painstakingly glued dozens of layers of the soft crystals atop a harder iron-based superconductor, barium iron arsenide, that Dai’s lab had previously shown it could detwin by squeezing. The piggybacking paid off when experiments showed the iron selenide layers snapped into alignment when the barium iron arsenide was detwinned.

In the 2019 study, Dai, Chen and Lu, another of Dai’s former students, measured the behavior of electron spins at low energies with inelastic neutron scattering. In the latest experiments, inelastic X-ray scattering revealed spin behavior at high energy levels.

“Because the penetration depth for RIXS is only a few micrometers, the RIXS beam spot can be moved from iron selenide to barium iron arsenide, thus allowing us to clearly distinguish what is happening in each,” said Dai, Rice’s Sam and Helen Worden Professor of Professor of Physics and Astronomy. “RIXS is complementary to the experiments we did in 2019 because it can probe high-energy spin excitations but does not have the resolution to look at low-energy excitations.”

“Extraordinarily, we could reveal a spin anisotropy comparable — if not greater — to that in the already highly anisotropic barium iron arsenide,” said Lu, a professor of physics at Beijing Normal. “This spin anisotropy decreases with increasing temperature, and disappears around the nematic transition temperature — the temperature at which the material ceases to be in an electronic nematic state.”

The researchers said the results indicate that nematicity in iron selenide is driven by quantum spin excitations.

“These features are theorists’ dreams, as they directly inform theoretical understanding,” said Si, one of two theorists on the paper. The other, Rong Yu of Renmin University in Beijing, is a longtime collaborator and former postdoctoral researcher in Si’s group at Rice.

“We were able to provide a qualitative and even semiquantitative understanding of the observed spin-excitation spectrum based on a theoretical model of quantum magnetism that Rong Yu and I had advanced several years ago for iron selenide,” Si said. “The detwinning effort, which was instigated by Pengcheng’s 2019 work, is reaping fruits at a level that I didn’t previously think possible.

“It shows that quantum magnetic fluctuations are primarily responsible for the development of the electronic nematic correlation,” Si said. “Moreover, the high-energy spin excitations it revealed in iron selenide corroborate other electronic properties in implicating strong electron-correlation effects as bringing about high-temperature superconductivity in the iron-based superconductors.”

Si is the Harry C. and Olga K. Wiess Professor of Physics and Astronomy and director of the Rice Center for Quantum Materials.