Researchers have created a laser system based on a network like a spider’s web, which can be precisely controlled to produce different light colours. 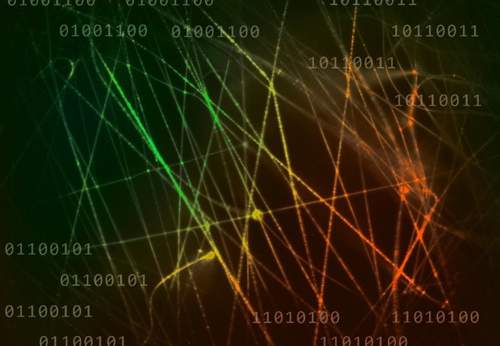 The system, invented by a team led by researchers at Imperial College London with partners in Italy and Switzerland, could be used in new sensing and computing applications. The team are already collaborating with research and industrial partners across Europe to explore applications in machine learning.

In traditional lasers, light bounces between two mirrors in a material that amplifies the light until it reaches a certain threshold. Laser light is produced in narrow beams that are stable over long distances. However, the light is usually only produced in one frequency, corresponding to a single colour.

Network lasers work differently and are made from a mesh of nanoscale optical fibres that are fused together to form a web-like network. Light travels along the fibres and interferes in such a way to create hundreds of colours simultaneously. However, the colours are mixed in a complex fashion and emitted at random in all directions.

Now, in research published in Nature Communications, scientists have developed a method to precisely control a network laser so that it only emits a single colour or colour combination at a time. The system works by shining unique ‘illumination patterns’ on the network laser, with each precise pattern inducing a different laser colour, or combination of colours.

The illumination patterns are created using a digital micromirror device (DMD), which is a computer-controlled device with thousands of mirrors. The DMD is optimised by an algorithm that selects the best pattern for a particular laser colour.

The team say the new network laser systems could have many applications, particularly as they can be integrated into chips. For example, they could be used as highly secure hardware keys, where the illumination patterns become the secure keys that generate the password in the form of the laser spectrum.

Because the lasers are also highly sensitive to the correct illumination patterns, the network lasers could be used as sensors that can track even small changes on surrounding surfaces.

The system is the result of a five-year collaboration between Imperial’s Departments of Physics and Mathematics, spearheaded by postdoctoral researchers Dhruv Saxena and Alexis Arnaudon, one in each Department. The research team produced tools to optimise the illumination patterns based on physical modelling and theory, and demonstrated them in action.

Maths and physics coming together

Co-author Professor Riccardo Sapienza, from the Department of Physics at Imperial College London, said: “We have combined the mathematics of network theory with laser science to tame these complex lasers. We believe this will be at the heart of light processing on chips and we are testing it now as a machine learning hardware.”

Co-author Professor Mauricio Barahona, from the Department of Mathematics at Imperial, said: “This is an example where we saw maths and physics coming together, showing how the properties of a network can affect and help control the lasing process. The next big challenge is to design networks and illumination patterns to control the temporal profile of the laser light and encode information in it.”

The researchers are part of the EU Horizon 2020 project CORAL (COntrolling network RAndom Lasers on chip), together with IBM Zurich, to drive the emerging field of network lasers towards commercialisation. The research was also funded by the UK EPSRC