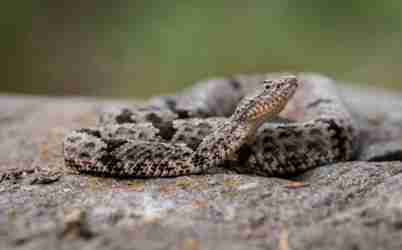 A recent study shows that evolutionary diversity among prey – say, a combination of mice, turtles and fish – has been the key driver of venom complexity in rattlesnakes, copperheads and other North American pit vipers. To arrive at this conclusion, researchers added data on the genes and proteins in venom samples to a century’s worth of previous studies of what snakes ate. The team found that a diet consisting of prey with the greatest evolutionary distance between common ancestors was associated with snake venom that contained the widest range of toxins. Snake venom incapacitates prey by disrupting a variety of physiological processes, attacking the nervous system, blood-clotting capabilities, cell membranes and muscles. So, for example, a snake that eats mammals and amphibians would need venom that could act on the quite different constitutions found in each of those classes of animals. “A mouse is a mouse is a mouse to a rattlesnake, whereas a mouse and a frog and a lizard are quite different – because of the way that they’re built, their physiology, and the way venom attacks them,” said H. Lisle Gibbs, professor of evolution, ecology and organismal biology at The Ohio State University and a co-author of the study.

The finding suggests that species richness – the number of different species in an ecological community – is not the driving force behind predator trait complexity. Instead, snake venom complexity has evolved in response to the divergence, or how distantly related prey species are, to mirror the divergence of the venom’s physiological targets. The research is published online (April 19, 2021) in the journal Proceedings of the National Academy of Sciences.

The study was a massive field-work and computational undertaking, involving capturing snakes in their natural habitats to collect their venom and the analysis of large sets of genetic data and historic ecological information to explore the evolutionary relationships between diet and venom complexity. Researchers analyzed biological samples from 169 front-fanged venomous snakes, a group that includes rattlesnakes, cottonmouths and cantils, comparing the protein complexity of the venom itself to the genes that had been expressed in the venom glands. The data analysis allowed the scientists to confirm that what was seen at the genetic level reflected the complexity of venom based on its protein content, and also served as the basis of a new tree of evolutionary relationships for this group of snakes.