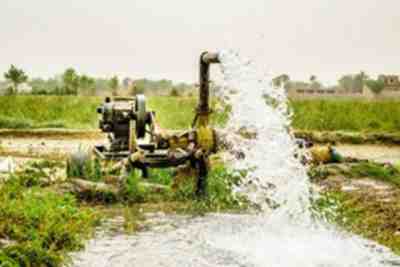 Groundwater pumping is speeding up how quickly water cycles through aquifers. Photo Credit: Zms Via Istock

How old is your water? It may seem like a peculiar question at first, but there are real implications to how long a drop of water has spent underground. Research suggests that the water cycle is speeding up in some places as a result of human enterprise.

“We usually think deep groundwater is safe from the contaminants found closer to the Earth's surface,” said Thaw. “However, intensive groundwater pumping is pulling recently replenished groundwater to deeper depths, potentially pulling contaminants down, too.”

Groundwater takes time to move about the subterranean world, flowing between soil particles and through crevices in the rock. Today’s raindrops might not be tomorrow’s well water; in fact, they might not even be next decade’s well water. “Half or more of all the groundwater stored on the planet is rain and snow that fell more than 12,000 years ago,” said Scott Jasechko, an associate professor in UC Santa Barbara’s Bren School of Environmental Science & Management. Intuitively, the deeper you look, the older the water generally is.

Thaw and fellow postdoc Merhawi GebreEgziabher GebreMichael worked with senior author Jasechko and Jobel Villafañe-Pagán, an undergraduate student at the University of Puerto Rico, Mayagüez, who joined the team via the Geosciences Education & Mentorship Support program. Together, the authors sought to determine how pumping affects the movement of groundwater. To this end, they leveraged a dataset of concentrations of a rare form of hydrogen, known as tritium, in 15,000 groundwater wells across the contiguous United States.

Scientists have used tritium to trace groundwater since the 1960s. This radioactive variety, or isotope, of hydrogen occurs naturally on Earth, mostly in low concentrations in the stratosphere, where it is produced by high-energy particle collisions. Tritium can substitute for the more common versions of hydrogen in water molecules (H2O), making the compound slightly radioactive.

Tritium’s concentration drastically increased in the 20th century due to nuclear testing from the mid-1950s until the Partial Nuclear Test Ban Treaty in 1963. So there was a pulse of radioactive hydrogen introduced into the world in the mid 1900s. Much of it rained out, with some of that percolating into the soil to become groundwater. Scientists can use tritium concentrations to identify recent groundwater, which they define as water that seeped into the earth after 1953.

The authors grouped nearby wells together into 74 aquifer systems. This enabled them to analyze the tritium levels of groundwater at different depths throughout each system. They used these measurements to calculate the proportion of each sample that was from modern precipitation. Their cutoff for “old” groundwater was any sample composed of less than 25% modern groundwater.

The team now had an idea of how deep modern groundwater was through the systems they were studying, but they still needed something to compare it to. Subsurface geology is messy, and it affects how quickly groundwater can travel. For instance, water takes more time to sink into less permeable layers, like clay.

So the authors used local geology to characterize groundwater movement. “For every one of the different study areas, we estimated how deep you have to go until you hit a thick low-permeability layer,” Jasechko said. In some areas, it may be just feet below the surface, while in others it can be hundreds of feet.

“The analysis of environmental isotopes, coupled with analysis of confining unit depths, enabled us to understand the impact of excessive pumping on downward flow,” said co-author GebreEgziabher GebreMichael.

Finally, the authors could test their hypothesis using statistics to account for this geologic variability. They found there is a correlation between groundwater pumping and the depth that young groundwater reaches, even after considering an area’s geology.

The situation is a bit like drinking a slushy through a straw. You get the bottom stuff (old water) first and this draws in the top stuff (new water) to replace it. Except in this example, the slushy is periodically refilled from the top. Scientists call this phenomenon “pumping-induced downwelling.”

Previous studies have uncovered pumping-induced downwelling at local scales; for instance, in Indonesia and California’s Central Valley. However, this is the first to reveal the phenomenon at large scales. And the implications aren’t simply academic.

Groundwater transports dissolved compounds, called solutes. Some of these are harmful, like nitrates from agricultural runoff. These surface-borne contaminants are filtered and broken down over the years as water percolates through the earth. As a result, deeper wells draw up older groundwater with lower concentrations of these contaminants. By pulling young groundwater deeper more quickly, we are potentially moving these surface-borne pollutants to the depths tapped by municipalities and rural communities, the authors note.

Research from Southeastern Asia suggests that even benign solutes can pose a health hazard. They can kickstart chemical reactions, mobilizing contaminants that would otherwise be locked away in compounds that don’t dissolve in water. For instance, under the right conditions, dissolved organic carbon can cause arsenic-bearing minerals to release their arsenic into the groundwater, potentially increasing the concentrations of this toxin in water drawn from nearby wells.

Unfortunately, groundwater resources are threatened from below as well. In many places with intense pumping, salinity at depth is a growing issue, as is the downward spread of surface pollutants. In 2018, Jasechko and his colleagues published a study detailing how pumping was dropping groundwater levels to depths where they start to become salty. “The window of good groundwater may be diminishing both from above and potentially from below,” he said.

The authors believe their results reflect trends in other regions as well. “Our analysis of dozens of aquifer systems across the U.S. captures a wide array of variability in natural conditions and human activities,” Jasechko said. Still, he intends to extend some of this research globally. He plans to examine tritium profiles in other major aquifer systems around the world, especially those where groundwater withdrawal rates are high.