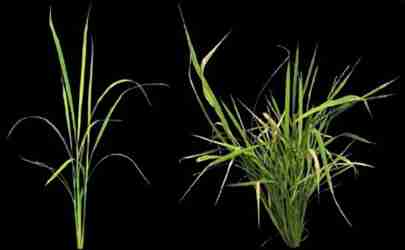 A research team led by the University of Copenhagen has discovered a microProtein that can control the physical shape of plants including barley and rice and potentially make them more productive.  The microProtein has been named Little Ninja and the studies are published in the journal PNAS. "By increasing Little Ninja levels, we have been able to observe plants that are smaller and bushier. That is, we can force a plant to take on a different shape. This is a coveted feature of crop plants, as it makes them more resistant to wind. More side shoots can also result in more flowers and thereby more fruit. By adjusting the amount of Little Ninja in a plant, there is a potential for more productive and sustainably grown crops," explains Associate Professor Stephan Wenkel of the University of Copenhagen’s Department of Plant and Environmental Sciences.

MicroProteins are the result of gene mutations that occur through evolution. Several genes can encode similar proteins. But sometimes, mutations occur which turn a large protein into a very small protein. In some cases, the smaller protein, known as a microProtein, can then regulate the activity of the larger proteins, making it a major influencer on biological processes. The Little Ninja is just such a microProtein. It dominates the larger "partner protein", the so-called NINJA, and helps regulate the signalling of a hormone called jasmonic acid, which serves among others as a plant's defence system against insects and other threats. The study suggests that as one manipulates Little Ninja levels, there is a corresponding change of jasmonic acid signalling in a plant, which then affects plant structure and growth.

As the researchers were hunting for microProteins with interesting biological functions, they came across Little Ninja. This was done by combing through the entire genome of a model crop and sorting all of its proteins.

The effect of raising the level of Little Ninja could be transferred by the researchers to several other crop plants, which were then able to produce more side shoots as well. Using the CRISPR technique, the researchers also managed to create a copy of the Little Ninja in a genome where it is naturally not present. Here, they witnessed the same effect on plant growth.

Source: Based on University of Copenhagen news release