A new analysis by a team of physicists offers an innovative means to predict ‘cosmological signatures’ for models of dark matter. 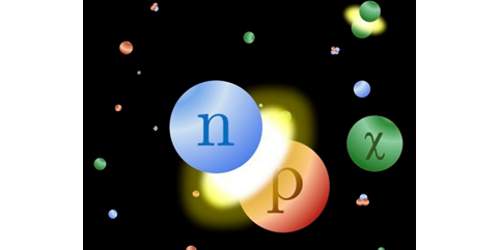 An artist’s rendition of big bang nucleosynthesis, the early universe period in which protons "p" and neutrons "n" combine to form light elements. The presence of dark matter "χ" changes how much of each element will form. Image courtesy of Cara Giovanetti/New York University

A team of physicists has developed a method for predicting the composition of dark matter—invisible matter detected only by its gravitational pull on ordinary matter and whose discovery has been long sought by scientists.

Its work, which appears in the journal Physical Review Letters, centers on predicting “cosmological signatures” for models of dark matter with a mass between that of the electron and the proton. Previous methods had predicted similar signatures for simpler models of dark matter. This research establishes new ways to find these signatures in more complex models, which experiments continue to search for, the paper’s authors note.

“Experiments that search for dark matter are not the only way to learn more about this mysterious type of matter,” says Cara Giovanetti, a Ph.D. student in New York University’s Department of Physics and the lead author of the paper.

“Precision measurements of different parameters of the universe—for example, the amount of helium in the universe, or the temperatures of different particles in the early universe—can also teach us a lot about dark matter,” adds Giovanetti, outlining the method described in the Physical Review Letters paper.

In the research, conducted with Hongwan Liu, an NYU postdoctoral fellow, Joshua Ruderman, an associate professor in NYU’s Department of Physics, and Princeton physicist Mariangela Lisanti, Giovanetti and her co-authors focused on big bang nucleosynthesis (BBN)—a process by which light forms of matter, such as helium, hydrogen, and lithium, are created. The presence of invisible dark matter affects how each of these elements will form. Also vital to these phenomena is the cosmic microwave background (CMB)—electromagnetic radiation, generated by combining electrons and protons, that remained after the universe’s formation.

The team sought a means to spot the presence of a specific category of dark matter—that with a mass between that of the electron and the proton—by creating models that took into account both BBN and CMB.

“Such dark matter can modify the abundances of certain elements produced in the early universe and leave an imprint in the cosmic microwave background by modifying how quickly the universe expands,” Giovanetti explains.

In its research, the team made predictions of cosmological signatures linked to the presence of certain forms of dark matter. These signatures are the result of dark matter changing the temperatures of different particles or altering how fast the universe expands.

Their results showed that dark matter that is too light will lead to different amounts of light elements than what astrophysical observations see.

“Lighter forms of dark matter might make the universe expand so fast that these elements don’t have a chance to form,” says Giovanetti, outlining one scenario.

“We learn from our analysis that some models of dark matter can’t have a mass that’s too small, otherwise the universe would look different from the one we observe,” she adds.