Researchers have mapped out part of the brain network responsible for the negative consequences of nicotine, opening the door to interventions that could boost the aversive effects to help people quit smoking. 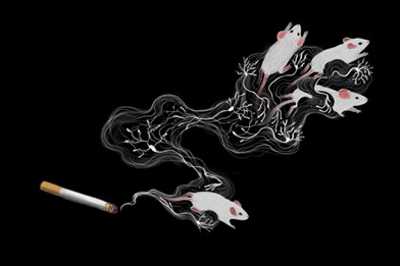 Nicotine is addictive because it activates the brain’s dopamine network, which makes us feel good. UC Berkeley researchers now show in experiments on mice that nicotine in high doses also activates a recently discovered dopamine network that responds to unpleasant stimuli. This aversive dopamine network could be leveraged to create a therapy that boosts the negative effects and lessens the rewards of nicotine. (Image credit: Christine Liu, UC Berkeley)

If you remember your first hit on a cigarette, you know how sickening nicotine can be. Yet, for many people, the rewards of nicotine outweigh the negative effects of high doses.

University of California, Berkeley, researchers have now mapped out part of the brain network responsible for the negative consequences of nicotine, opening the door to interventions that could boost the aversive effects to help people quit smoking.

Though most addictive drugs at high doses can cause physiological symptoms that lead to unconsciousness or even death, nicotine is unique in making people physically ill when inhaled or ingested in large quantities. As a result, nicotine overdoses are rare, though the advent of e-cigarettes has made “nic-sick” symptoms like nausea and vomiting, dizziness, rapid heartbeat and headaches more common.

The new research, conducted in mice, suggests that this aversive network could be manipulated to treat nicotine dependence.

“Decades of research have focused on understanding how nicotine reward leads to drug addiction and what are the underlying brain circuits. In contrast, the brain circuits that mediate the aversive effects of nicotine are largely understudied,” said Stephan Lammel, UC Berkeley associate professor of molecular and cell biology. “What we found is that the brain circuits that are activated after a high aversive dose are actually different from those that are activated when nicotine is delivered at a low dose. Now that we have an understanding of the different brain circuits, we think we can maybe develop a drug so that, when nicotine is taken at a low dose, these brain circuits can be coactivated to induce an acute aversive effect. This could actually be a very effective treatment for nicotine addiction in the future, which we currently do not have.”

Lammel and Christine Liu, who recently obtained her Ph.D. from UC Berkeley, also found that nicotine receptors in the reward pathway become desensitized by high doses of nicotine, which probably contributes to the negative experience of high doses.

“The inhibitory inputs and the desensitization of nicotine receptors on the dopamine neurons themselves both contribute to decreased dopamine signaling in the reward pathway, then decreased feelings of pleasure and, therefore, behavioral aversion,” Liu said.

Lammel, Liu, graduate student Amanda Tose and their colleagues described the brain circuits involved in nicotine aversion in a paper accepted by the journal Neuron and now posted online.

The yin and yang of dopamine

Nicotine, like cocaine and heroin, is known to cause addiction by activating the body’s reward network: Nicotine binds to receptors on cells that release the neurotransmitter dopamine into the brain, where it affects everything from pain perception and mood to memory. The dopamine network, in general, provides positive feedback that reinforces our desire to seek out pleasurable activities.

But three years ago, Lammel and his colleagues discovered a parallel dopamine network that responds to unpleasurable stimuli by releasing dopamine into different areas of the brain than does the dopamine reward network. The discovery of this yin-yang nature of dopamine came at a time when it was becoming clear that dopamine performs quite different roles in various areas of the brain, exemplified by its function in voluntary movement, which is affected in Parkinson’s disease.

Since then, Lammel’s team has found that some chemicals also stimulate the negative dopamine network. Lammel, Liu and Tose looked closely at nicotine’s effects on the body precisely because of its known aversive effects at high doses, and found that it, too, activates the network.

“This subcircuitry we reported had a major impact in the field,” Lammel said. “For the first time, we identified this particular subcircuit of the dopamine system that was activated by negative emotional stimuli, such as an outburst of electrical shock. Now, we’ve found that a completely different stimulus — a pharmacological stimulus, a drug — activates the same system. This means that the system is particularly designed to be activated by aversive stimuli.”

To demonstrate this for nicotine, Liu and her colleagues infused the drug into mice and measured the second-by-second release of dopamine in the brain using a recently developed technique called dLight-based fiber photometry. Previously, dopamine could only be measured over periods of minutes, which obscured the short-term responses of neurons to dopamine.

They then used chemical antagonists to inactivate a specific nicotine receptor called alpha-7 in the aversion network, which reduced the effects of aversive nicotine on neural activity. Subsequent optogenetic experiments eliminated the aversive behavior.

The only drug designed to help with nicotine cessation, varenicline, could work by increasing aversion via the alpha-7 receptor and lessening desensitization of the alpha-4/beta-2 receptor, she said, but its precise mechanism of action is currently unknown.

Lammel noted that drugs that block the alpha-7 nicotinic acetylcholine receptor might not work as a treatment for tobacco or nicotine addiction because they would block many necessary functions of the receptor. But identifying this nicotine receptor as key to mammals’ aversion to high-dose nicotine will help researchers develop targeted drugs to tweak the body’s response to a typical dose that a smoker would ingest when lighting up a cigarette.

“Maybe in the future that will be an approach for nicotine addiction therapy, where we use genetic editing technologies to selectively target these receptors in specific brain circuits and then overexpress or delete receptors,” Lammel said. “What we deliver here is a blueprint of a brain circuit and nicotine receptor subtype that is critically important for nicotine’s aversive properties.”