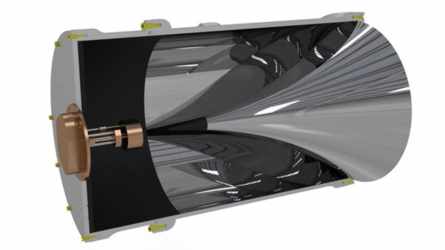 A 3D computer rendering of the interior of the BREAD detector. The reflective surfaces are designed to funnel photons into a sensor to measure them. Courtesy BREAD collaboration

Something is out there, but we can’t see it. Everything we can see in our universe, from stars to entire galaxies, behaves as though it’s being affected by something invisible, but no experiments have ever been able to directly detect that substance.

That mysterious substance is known as dark matter—and a group of scientists, including those from the University of Chicago and Fermi National Accelerator Laboratory, have released an innovative new design for an experiment to find it. Because we don’t know exactly what dark matter is, scientists have proposed a number of different forms it could take: This particular detector will search for one possible form, called an “axion.”

The design, the Broadband Reflector Experiment for Axion Detection, or BREAD, is especially promising because it can look for possible axions with a range of different masses. A paper describing the design was published March 28 in Physical Review Letters.

‘As scientists catalogued the movements of stars and galaxies, they noticed that they were behaving as though something invisible but massive was affecting their gravitational behavior. Imagine seeing a plastic bag sagging heavily to the floor, but the only thing visible inside is a ping-pong ball. Some other massive thing must be in the bag, but we don’t know what it is—and that makes devising a method of discovery much more difficult.

Scientists have come up with a number of possible ways this dark matter could exist. One such theorized form is an “axion,” a particle that can convert into light under the right circumstances and may have a very broad range of wavelengths—it can be as long as several football fields or shorter than a bacterium.

If such axions exist, they are likely slowly moving through us all the time without our notice.

“You can think of axions like a field all around us. We are immersed,” said Fermilab scientist and study collaborator Andrew Sonnenschein.

“It would be like we’re swimming in a sea of axions all the time and don’t know it,” said collaborator David Miller, associate professor of physics at the University of Chicago.

If this were the case, a detector built anywhere on Earth could pick such axions up if it had the right equipment.

“BREAD is essentially an antenna to listen to axion radio,” said first author Jesse Liu, a former UChicago postdoctoral researcher who is now with Cambridge University, “but on an unknown station that has never been heard before.”

The detector design is based around a large cylindrical magnet, similar in shape to the big MRI machines you see at a hospital. The inside of the cylinder is lined with metal; as axions come into the detector, they would be converted on the metal surface into photons—particles of light. Then a series of reflecting surfaces inside the detector focuses these photons down onto a single point with an antenna, or a sensor, that can pick them up.

“The advantage to this design is that it can look for a large range of candidates simultaneously,” said Miller, whose research at UChicago focuses on building technology for particle physics experiments. “Most axion experiments are designed to look very carefully at a very narrow range of possible wavelengths, but BREAD allows us to look at many frequencies at once. That’s helpful when you are where we are now, which is that we have no hint one way or another where it could be.”

The signal would likely be extraordinarily weak. “It could be less than one photon per day,” said collaborator and Fermilab scientist Stefan Knirck. That’s a challenge for any detector, but sensor technology is improving all the time, and any new developments could be easily added to the detector to search for the proverbial needle in a haystack.

The group is working to build a small-scale version at Fermilab to test the concept. If it looks promising, larger versions could be built. A larger magnet would serve as a larger net that could find axions more quickly.

The goal is enticing. “If you found axions, it’d be like finding a whole new component of the universe that we didn’t know existed before,” said Miller. “And that discovery would make a lot of puzzle pieces suddenly fit together.”