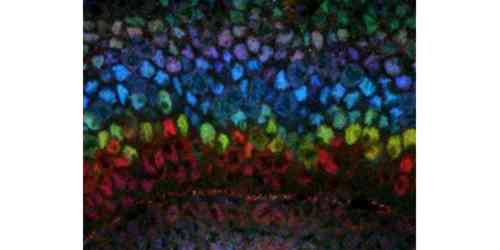 Researchers have identified the complete series of 10 factors that regulate the development of brain cell types in the visual system of fruit flies—including in what order these neurons develop. The findings, published in Nature, open new avenues of research to understand how brain development evolved in different animals and hold clues for regenerative medicine.

The human brain is composed of 80 billion neurons. These nerve cells differ in their form, function, and connectivity with other neurons to form neural networks. This complexity allows the brain to perform its many functions, from controlling speech and vision to storing memories and generating emotions.

While scientists have identified many types of neurons, how this complexity arises during the brain’s development is a central question for developmental neurobiology and regenerative medicine.

“Knowing how the human brain develops could allow us in the future to repeat these developmental processes in the lab to generate specific types of neurons in a Petri dish—and potentially transplant them in patients—or to trigger neuronal stem cells in living organisms to generate and replace missing neurons,” said Claude Desplan, Silver Professor of Biology at NYU and the study’s senior author.

Because studying the human brain is an incredibly complex endeavor, researchers rely on model organisms, such as mice and flies, to explore the intricate mechanisms involved in the brain’s processes. In both vertebrates, like mice and humans, and invertebrates, like flies, different types of neurons are generated sequentially as the brain develops, with specific types of neurons being generated first and other types being generated later from the same progenitor stem cell.

In the research published in Nature, the researchers studied the brains of the fruit fly Drosophila to uncover the complete set of tTFs needed to generate the roughly 120 neuron types of the medulla, a specific brain structure in the visual system of flies. They used state-of-the-art single-cell mRNA sequencing to obtain the transcriptome—all of the genes expressed in a given cell—of more than 50,000 individual cells that were then grouped into most of the cell types present in the developing medulla.

Focusing on neural stem cells, the researchers identified the complete set of tTFs that define the different windows of time in this brain region and the genetic network that controls the expression of these different tTFs that allow this temporal cascade to progress.

“Several tTFs had been previously identified in the brain’s visual system using available antibodies; we have now identified the comprehensive series of 10 tTFs that can specify all the neuron types in this brain region,” said one of the study’s lead authors, Nikolaos Konstantinides, now a group leader at the Institut Jacques Monod in Paris and a former postdoctoral fellow in the Desplan lab.

The researchers then identified the genetic interactions that allow the temporal cascade to progress and how this progression relates to the “birth order” of all neurons in the medulla, linking specific temporal windows with the generation of specific types of neurons. This cascade is necessary to produce the full extent of neural diversity of this brain region in a stereotypic order.

“Impairment of the temporal cascade progression leads to the generation of reduced neuronal diversity, hence altering brain development,” said Isabel Holguera, a postdoctoral fellow in NYU’s Department of Biology and one of the study’s co-first authors.

Finally, the team examined the first steps in the process of neural stem cells maturing into neurons, a stage in neuron development called differentiation. They found that the differentiation process for fly neurons and human cortical neurons was remarkably alike, with similar patterns of genes expressed during the various stages of differentiation.

“Our findings suggest that understanding the mechanisms of neuron development in flies can generate insight for the equivalent process in humans,” said co-first author Anthony Rossi, now a postdoctoral fellow at Harvard and a former graduate student in the Desplan lab.