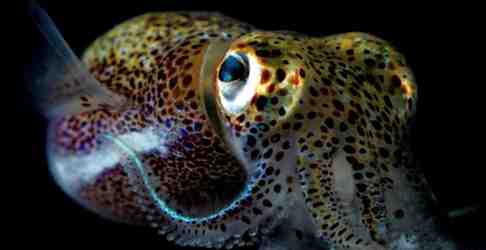 The gut microbiome has made a huge splash in human health with numerous products popping up promising vast benefits to everything from a healthy digestive system to better mood regulation. But humans aren’t the only ones partnering up with viruses, bacteria and fungi. Researchers at Michigan State University are “The bacteria and the squid are both easy to raise in a laboratory, and unlike other animals used to study microbiomes, the squids don’t rely on the bacteria for any of their nutritional needs or for their immune response,” Heath-Heckman said.

Because V. fischeri is the only bacteria that lives in the light organ, Heath-Heckman can directly tie changes she sees in the host to the way it interacts with the bacteria. Understanding the effects of this single host-single microbe interaction can shed light on more complicated associations with microbes in other plants and animals, even in humans peering into the dazzling world of microbiomes in plants and animals, searching for keys to a healthier world.

Carolyn Malmstrom, an associate professor in the Department of Plant Biology, is one of several researchers in MSU’s Ecology Evolution, and Behavior Program exploring how wildlife interacts with microbes. She studies how the changes humans make to landscapes influence plant interactions with microbes, particularly viruses, and the emergence of pathogens. Despite how human infrastructure has broken up natural landscapes, “microbes can still flow between urban, natural and agricultural areas.”

While we often think of viruses as pathogens,” said Malmstrom, who is also an MSU AgBioResearch faculty member, “the majority of plant viruses are not super pathogenic, but we notice the ones that are pathogenic because they can affect crop production” and thereby human health. Plant viruses can change the way plant genes are expressed and alter the chemistry within the host, which can affect the way insects and other herbivores interact with plants.

A notable example published in the journal Intervirology describes a plant virus that protects its host from being eaten by rabbits by altering the plant’s chemistry in a way that makes it taste much less appetizing. After all, she said, viruses can “knit together the tree of life in ways we don’t always appreciate.”

Elizabeth Heath-Heckman is an assistant professor in the Department of Integrative Biology studying a luminescent bacteria species called Vibrio fischeri that lives inside the Hawaiian bobtail squid. The squids have a light organ that sits just above their ink sac that glows with the help of these bacteria. The light organ aids in a camouflaging behavior called counter-illumination, which helps the squids avoid being spotted by predators swimming below them by disguising their silhouette against the bright surface of the water. This is an ideal set-up to study how bacteria affect the physiology and development of a host because it’s highly manipulable.

Kadeem Gilbert, an assistant professor of plant biology at MSU’s W.K. Kellogg Biological Station, studies the way plants alter their physical traits and consequently change their microbiomes. Much of his previous work has been done on carnivorous pitcher plants. These plants have modified leaves shaped like a pitcher filled with a liquid the plant produces that digests insects that fall inside. Gilbert described the inside of the pitcher as “a small aquatic ecosystem,” hosting entire communities of microbes and even some animals, like mosquitoes, who lay their eggs in the liquid.

Characteristics of the pitcher liquid, like the pH, color, and viscosity, are different for different species of pitcher plants, which changes what microbes and insects are able to live inside. Gilbert uses this set-up to “directly test larger ecological patterns in microbes co-existing with multicellular organisms and insects in a microenvironment.” And he has done just that, sampling and testing pitchers at different elevations to see if microbes decrease in abundance at higher elevations; a common pattern seen in plants and animals.

It turns out not all microbes respond the same way.

“With bacteria you don’t see community structuring by elevation; the pH of the microenvironment (the pitcher) is more important,” Gilbert said.

However, Gilbert did find that the algae, fungi, and insects living inside the pitchers were less abundant at higher elevations, following the expected pattern. Gilbert is now looking into how other types of plants regulate the pH of their leaf surfaces to understand how a host can promote helpful microbe growth and avoid harmful ones.

As the human microbiome has gained attention, both Heath-Heckman and Gilbert noticed a shift in the way people responded to their work.

Heath-Heckman explained that the idea of bacteria helping their hosts used to be met with much more skepticism when she started her Ph.D. in 2007, than it does now.

“With probiotic supplements showing up in advertising, the terms are much more a part of the public lexicon than 10 or 15 years ago” she noted.

“People are gaining a nuanced understanding of microbes instead of just thinking of them as pathogenic,” Gilbert said. When he bumped into a couple while collecting leaf samples recently, he found they had a sense of wonder thinking of these leaves as their own little worlds with things living in them.