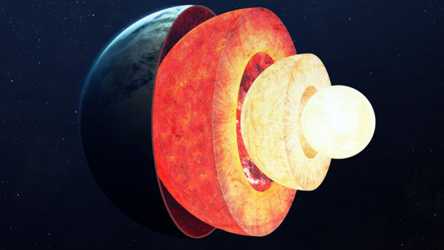 Researchers have uncovered the most detail ever of the mysterious structures laying between the Earth's mantle and core, also providing the strongest evidence yet they started life as an ocean of molten magma that eventually sunk.

The team of international researchers, including scientists from The Australian National University (ANU), used thousands of computer-modelled seismic waves to examine Ultra-Low Velocity Zones (ULVZs) beneath the Coral Sea between Australia and New Zealand. The area was selected because of the high frequency of earthquakes and the seismic waves these events unleash.

ULVZs sit at the bottom of the planet's mantle and on top of its liquid metal outer core and are so thin that they are normally invisible to tomographic imaging. For decades, scientists have speculated they are leftovers of the violent processes that shaped the early Earth.

Study co-author, Professor Hrvoje Tkalčić from ANU, said the team's findings confirm the chemicals, rocks and layers that make up ULVZs have largely been sitting unchanged for billions of years and the early days of the planet's formation.

"For a long time, no-one really knew for sure what these mysterious ULVZs were made up of. Now, we've developed the clearest picture yet. Using advances in seismology and mathematical geophysics made at ANU we've shown that ULVZs are made up of layers," Professor Tkalčić said.

"Over billions of years of the Earth's shaping and reshaping, these zones have churned close to the planet's core but largely remained intact.

"It's like an egg in a cake that doesn't get mixed in with the rest of the ingredients but stays as yoke and egg white, despite the constant mixing all around it.

"This is a really significant breakthrough as we have unlocked not only a clue as to how the early Earth formed but confirmed ULVZs are clumps of leftovers from this process that are pretty much the same as they were billions of years ago."

The study, published in Nature Geoscience, was led by Dr Surya Pachhai from the University of Utah, with much of the research completed as part of his PhD at ANU.

According to Dr Pachhai the most surprising finding in the study is that ULVZs are made up of a lot more diverse materials than first thought.

"ULVZs are not homogenous but contain strong structural and compositional variations within them," he said.

"We found that this type of ULVZs can be explained by chemical heterogeneities created at the very beginning of the Earth's history and that they are still not well mixed after 4.5 billion years of mantle convection."