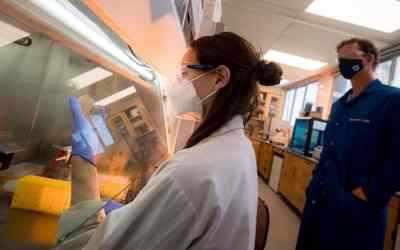 Years of toil in the laboratory have revealed how a marine bacterium makes a potent anti-cancer molecule.

The anti-cancer molecule salinosporamide A, also called Marizomib, is in Phase III clinical trials to treat glioblastoma, a brain cancer. Scientists now for the first time understand the enzyme-driven process that activates the molecule.

Researchers at UC San Diego’s Scripps Institution of Oceanography found that an enzyme called SalC assembles what the team calls the salinosporamide anti-cancer “warhead.” Scripps graduate student Katherine Bauman is the lead author of a paper that explains the assembly process in the March 21 issue of Nature Chemical Biology.

The work solves a nearly 20-year riddle about how the marine bacterium makes the warhead that is unique to the salinosporamide molecule and opens the door to future biotechnology to manufacture new anti-cancer agents.

“Now that scientists understand how this enzyme makes the salinosporamide A warhead, that discovery could be used in the future to use enzymes to produce other types of salinosporamides that could attack not only cancer but diseases of the immune system and infections caused by parasites,” said co-author Bradley Moore, a Distinguished Professor at Scripps Oceanography and the Skaggs School of Pharmacy and Pharmaceutical Sciences.

Salisporamide has a long history at Scripps and UC San Diego. Microbiologist Paul Jensen and marine chemist Bill Fenical of Scripps Oceanography discovered both salinosporamide A and the marine organism that produces the molecule after collecting the microbe from sediments of the tropical Atlantic Ocean in 1990. Some of the clinical trials over the course of the drug’s development took place at Moores Cancer Center at UC San Diego Health.

“This has been a very challenging 10-year project,” said Moore, who is Bauman’s advisor. “Kate’s been able to bring together 10 years’ worth of earlier work to get us across the finish line.”

A big question for Bauman was to find out how many enzymes were responsible for folding the molecule into its active shape. Are multiple enzymes involved or just one?

“I would have bet money on more than one. In the end, it was just SalC. That was surprising,” she said.

Moore says the salinosporamide molecule has a special ability to cross the blood-brain barrier, which accounts for its progress in clinical trials for glioblastoma. The molecule has a small but complex ring structure. It starts as a linear molecule that folds into a more complex circular shape.

“The way nature makes it is beautifully simple. We as chemists can’t do what nature has done to make this molecule, but nature does it with a single enzyme,” he said.

The enzyme involved is common in biology; it is one that participates in the production of fatty acids in humans and antibiotics like erythromycin in microbes.

Bauman, Percival Yang-Ting Chen of Morphic Therapeutics in Waltham, Mass., and Daniella Trivella of Brazil’s National Center for Research in Energy and Materials determined the molecular structure of SalC. For this purpose, they used the Advanced Light Source, a powerful particle accelerator that generates x-ray light, at the U.S. Department of Energy’s Lawrence Berkeley National Laboratory.

“The SalC enzyme performs a reaction very different from a normal ketosynthase,” Bauman said. A normal ketosynthase is an enzyme that helps a molecule form a linear chain. SalC, by contrast, manufactures salinosporamide by forming two complex, reactive, ring structures.

A single enzyme can form both of those ring structures that are hard for synthetic chemists to make in the lab. Armed with this information, scientists now can mutate the enzyme until they find forms that show promise for suppressing various types of disease.

“Inhibiting that proteasome makes it a great anti-cancer agent,” said Bauman, speaking of the protein complex that degrades useless or impaired proteins. But there’s another type of proteasome found in immune cells. What if scientists could devise a slightly different salinosporamide than salinosporamide A? One that poorly inhibits the cancer-prone proteasome but excels at inhibiting the immunoproteasome? Such a salinosporamide could be a highly selective treatment for autoimmune diseases, the type that causes the immune system to turn upon the very body it should protect.

“That’s the idea behind generating some of these other salinosoporamides. And access to this enzyme SalC that installs the complicated ring structure opens the door to that in the future,” Bauman said.

As Bauman’s list of co-authors attests, Moore’s group began working on this project more than a decade ago. Former Moore Lab postdoctoral scientists who contributed are Tobias Gulder of Germany’s Technical University of Dresden; Daniela Trivella of Brazil’s National Center for Research in Energy and Materials; and Percival Yang-Ting Chen of Morphic Therapeutics in Waltham, Mass. Vikram V. Shende is a current postdoctoral scientist in the Moore Lab. The other two co-authors are longtime collaborators on the project: Sreekumar Vellalath and Daniel Romo of Baylor University.