Researchers have discovered that a compound they created in the lab, could be a promising alternative to certain piezoelectric materials. 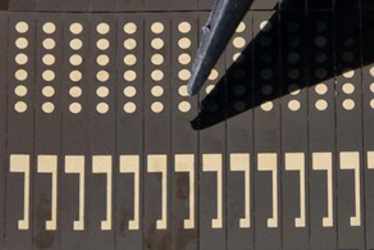 Scientists at EPFL’s School of Engineering have found that by manipulating atomic defects in a lead-free material that is normally not piezoelectric, it is possible to induce a large piezoelectric effect. Piezoelectric materials are used widely in modern-day devices, such as digital watches, cars (for controlling emissions of harmful gases) and ultrasonic instruments (for medical diagnosis and imaging). “Piezoelectric materials convert electrical energy into mechanical energy and vice-versa,” says Dr. Dae-Sung Park, a postdoc at EPFL’s research group for ferroelectrics and functional oxides, headed by Prof. Dragan Damjanovic. “They are practical and versatile and can be used as force sensors, actuators for moving objects or high-frequency resonators for imaging and electronic filters.” These types of miniaturized devices with both electrical and mechanical properties are known as micro-electro-mechanical systems (MEMS).

MEMS hold great promise for biomedical applications, such as for diagnostics, prognostics and therapeutics, but the lead metal that the best of them contain is toxic to the human body and environment. Researchers are therefore working to create lead-free alternatives to the piezoelectric materials currently employed in MEMS. The research done by Dr. Park and Prof. Damjanovic was carried out under the BioWings project, an EU initiative to develop lead-free MEMS that can be used as actuators in various types of biomedical applications. “The main objective of BioWings is to develop systems that are based on a property called electrostriction, rather than piezoelectricity,” says Damjanovic.

The EPFL researchers found a way to break this symmetrical electrostrictive effect by applying a constant electric field in addition to an alternating field . This essentially turned the electrostrictive property of gadolinium-doped cerium oxideinto a piezoelectric one.

“The addition of gadolinium in ceria creates a large concentration of atomic defects (oxygen vacancies) that are mobile in the presence of an electric field. That means that a strong piezoelectric effect in gadolinium-doped cerium oxide can be induced by controlling the defects.” says Park. “By manipulating the mobile defects, we can increase piezoelectric susceptibility by a factor of 100 relative to even the most powerful lead-containing piezoelectric materials.” Damjanovic adds: “Our goal is not to eliminate or replace these materials, but rather to provide alternatives to those containing lead.”

The scientists didn’t expect to obtain such encouraging results. Park spent over two years verifying his conclusions before publishing them in Science. “Ours is a major scientific discovery for the fields of ionic, piezoelectric and ferroelectric materials.”