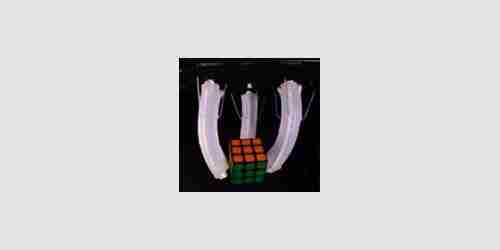 With the use of tensile jamming - that is, vacuum-induced interaction among a bundle of small fibres - a team of roboticists has developed soft robots that are dexterous enough to handle a Rubik’s Cube and twist the cap off a jar. The researchers, led by Rebecca Kramer-Bottiglio, the John J. Lee Associate Professor of Mechanical Engineering & Materials Science, had their results published in Science Advances. Key to the Yale researchers’ robots is that their actuators - devices that turn energy into mechanical work – are combined with fibres that can quickly stiffen. “In contrast to robotic systems employing multiple actuators, which activate a subset of those actuators depending on the desired body configuration and behaviour, we have developed an inverted approach where a single actuator can attain many trajectories by patterning and controlling material properties at the actuator surface,” said Kramer-Bottiglio. Typical pneumatic soft actuators incorporate fixed patterns of a stiffer material, so the actuators move only in one pre-programmed direction when inflated. “But with fibre jamming, we can put these stiffness-tuning fibres around the actuator so you can change which part is stiff,” said Bilige Yang, the lead author of the study. The fibres, when jammed by force of vacuum, provide increased stiffness on different sides of the robot. “By selectively changing the stiffness around a cylindrical actuator, it’s able to move in basically any direction you want it to, which simulates what a biological system is able to do,” Yang said. “That puts us a step towards mimicking what nature can do.”

Conventional robotic gripping devices have a limited range of motion. The tensile fibre system, though, provides enough control for the roboticists to make a dexterous gripping device, similar to a human hand. Each of the device’s robotic fingers has its own set of fibres, which gives it multiple types of motions. Depending on which fibres are jammed, the robotic fingers demonstrated three different grasping modes: a “pinching grasp” for picking up relatively small objects, an “outward-hooking” motion for latching onto the inside of concave objects, and a twisting motion. Using the three grasp modes separately, the gripper was able to pick up a Rubik’s cube, lift a bowl, and twist the cap off a jar. With tensile jamming fibres, the modes of stiffness can change in less than a tenth of a second. That kind of agility sets up the researchers for their next goal, which is to make shape-shifting sheets and dynamically control robot surface curvatures using this system.