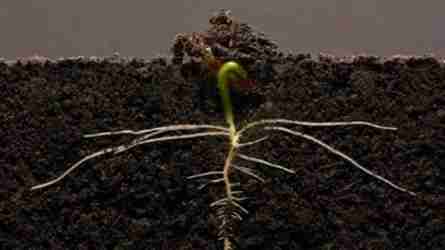 A new study in plants shows that retinoids’ tissue-generating capacities are also responsible for the appropriate development of roots.  In a new study, appearing August 26 in the journal Science, a research team led by Alexandra Dickinson, assistant professor at the University of California, San Diego, and Philip Benfey, the Paul Kramer Distinguished Professor of Biology at Duke University, identifies the compound that plays a key role in triggering the development of plants’ lateral roots.

To test if retinal was indeed behind lateral root development, Dickinson and her team treated seedlings with a dye that glows when retinal is bound by a protein inside a cell. As the seedling grew, glowing dots appeared near the tip of the main root. Soon after, a lateral root would grow from those glowing spots. The process repeated at regular intervals as the seedling developed, showing that the growth of a lateral root was preceded by a peak in retinal binding. To confirm their findings, the team applied retinal directly to the plants’ primary root. Seedlings that got a retinal booster developed more lateral roots than normal.  To be extra sure, the team applied a compound that made plants incapable of producing retinal, and saw that these seedlings made very few lateral roots. They then applied retinal directly to these seedlings’ primary root, and sure enough, lateral roots started developing where retinal had been applied. “All the ways in which we looked at this question came back very positive,” Benfey said. “If an embryo is starved of retinal during its development, it will have developmental defects,” Benfey said. “It’s surprisingly analogous to what happens with plants and their lateral roots.” And the similarities don’t stop there: the cells of an animal embryo rely on special proteins to grab retinal from their surroundings. Plants produce their own retinoids, but they still need special proteins to bind them and activate developmental processes.

The research team found that the protein plants use to bind retinal is a doppelganger of the one found in animal cells. They are different, but have a similar structure and shape. “It is pretty exciting to have found both the signal that triggers root development and the protein that binds it,” Benfey said. Retinoids have multiple medical uses, from acne cream to cancer therapy. Discovering the exact ways in which they regulate the development of plant root tissues opens a whole new set of doors.