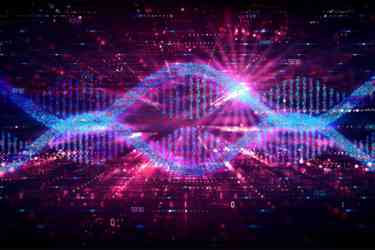 This is a rendering of mRNA, which was successfully used by Emory researchers to modulate gene expression in animal models. The finding could have application for several diseases, including cancer.

What if we could regulate the way genes are expressed? That question has long intrigued researchers, and a new study led by Emory University scientists helps narrow the knowledge gap by showing for the first time that mRNA can be used to activate genes in animals.

The investigation, a collaboration between Emory and Duke University, was led by Philip Santangelo, professor in the Wallace H. Coulter Department of Biomedical Engineering at Georgia Tech and Emory University. The study was published in ACS Nano.

Santangelo and his team discovered that messenger RNA, or mRNA, could be used to control gene expression inside mice using a “dead” version of the gene-editing tool, CRISPR/Cas9, while they were working on a project to develop medical countermeasures for nerve agents. The approach uses a lifeless molecule that does not create mutations in the DNA to kill the gene, but instead recruits proteins that turn on the gene. The Duke team, led by Charles Gersbach, contributed a novel gene activator that performed better than previous designs.

“The implications of this study are significant,” says Santangelo. “This work is an important steppingstone for identifying prophylactic interventions for preventing the damage wrought by multiple chemical weapons. But there is broader application potential as well.”

Using mRNA-encoded activators to regulate genes in cells inside the body offers promise of a treatment for a host of conditions: Santangelo says it could be used to treat cancer, liver disease and infectious diseases. It could also be used to help control how the immune system responds to pathogens.

“Fundamentally, this will help us fight disease by modulating gene expression in cells. We can regulate how cells behave and respond to harmful agents,” Santangelo says.

The research team is the first to show results on animals that have not been engineered. “The study shows real cause and effect: when we activated erythropoietin (a hormone), we saw a boost in the proportion of red blood cells, which are the ones that carry oxygen to various parts of the body,” Santangelo says.

The next step is to test this approach in larger animals and, possibly, humans in the not-too- distant future.

mRNA has recently been in the news for its use in two of the more widely used COVID-19 vaccines — manufactured by Moderna and Pfizer — in the United States. Research utilizing CRISPR, a tool that allows scientists to add, remove or change specific genetic information within the body, had already been accelerating in recent years. However, programming mRNA to deliver gene-modulating instructions is a relatively new area of research.

“We are using mRNA as a way to get even more out of CRISPR,” says Santangelo. “This research gives us a blueprint for activating genes within cells in the body. The fact that we were able to do this robustly in vivo, not just in cells in a petri dish, is extremely encouraging.”