Mechanical and spatial cues can also alter clustered bodies known as nucleoli, which reside inside the cell nucleus and regulate protein synthesis. 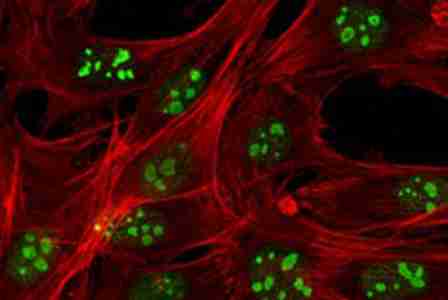 As researchers have explored the cellular-level workings of cancer, they’ve discovered that certain factors contribute to the disease’s formation and spread in the body. For example, it’s widely accepted that a stiff extracellular matrix, externally applied forces and geometric confinement can transform normal epithelial cells into cancer cells.

The cellular mechanobiology laboratory, led by Amit Pathak, associate professor of mechanical engineering and materials science in the McKelvey School of Engineering at Washington University in St. Louis, recently discovered that these mechanical and spatial cues can also alter clustered bodies known as nucleoli, which reside inside the cell nucleus and regulate protein synthesis. Results of the research were published Sept. 7 in the Special Issue on Forces On and Within Cells in Molecular Biology of the Cell.

According to Pathak, scientists have focused on how the nucleus behaves in stiff and soft environments, but few, if any, have examined what the nucleoli do in response to mechanical and spatial cues.

“There’s a whole field of mechanobiology that focuses on genes and protein expression from mechanical cues … with a focus on cell migration, general cell behavior, the nucleus and gene expression,” Pathak said. “What’s new with our work is the effects on nucleoli, the biggest protein condensates in the nucleus.”

For many years, scientists have known that cancer cells have larger nucleoli than healthy cells. They reasoned that the larger nucleoli allowed the cancer cells to respond better to the different stresses they encounter as they migrate through the body, a process known as metastasis, Pathak explained.

In their experiments, Pathak’s team worked with three human breast cell lines — a control set composed of healthy cells, a set of pre-cancerous cells and a set of metastatic breast cancer cells. They seeded these cell colonies on top of multiple hydrogels that were either stiff or soft and placed the samples in a chamber whose conditions mimic the human body.

Florence Flick Jaecker, a postdoctoral scholar in the Pathak lab, collected and stained the samples after three days of cell migration to identify protein markers for DNA and chromatin composition. Then an imaging analysis was performed to count the nucleoli and identify their location in a cell colony and measure their size. Further, José Almeida and Carly Krull, doctoral students in the lab, connected these nucleolar differences to the cells’ ability to proliferate and maintain their chromatin structure.

They observed that even healthy epithelial cells could begin to behave like cancer cells in terms of changes in their nucleoli size during the migration, which may be linked to their increased protein requirements. Overall, their results indicate that leader position and matrix stiffness affect the size and number of nucleoli in healthy epithelial cell colonies.

Their discovery that even the nucleoli of healthy cells can respond to spatial and mechanical cues opens a whole new line of inquiry that connects the somewhat distinct fields of cell mechanobiology and protein condensates.

“While there have been many studies on gene expression and epigenetic reprogramming responding to mechanics of cells’ environment, the same cues could also regulate protein synthesis and nucleoli, which remains somewhat overlooked,” Pathak said.

Their findings could have implications for a broad range of disease and aging processes where changes in tissue matrices interact with changes in cellular protein synthesis.