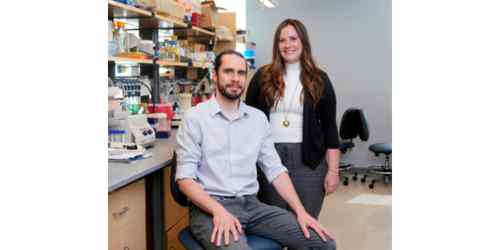 We need zinc: one-tenth of the proteins in our cells require this metal for their normal functions in all aspects of cell metabolism.

We acquire zinc by eating it — in foods or multivitamin supplements — but up to 30% of people in some parts of the world are at risk for zinc deficiency, which can cause slowed growth, impaired immune function, neurological disorders and cancers. The World Health Organization considers zinc deficiency a leading contributor to disease and death.

Despite zinc’s critical role, however, it has not been clear how the metal gets put into proteins that use it or how our cells respond to zinc deficiency.

Now, a team led by Vanderbilt researchers has described and characterized the first zinc metallochaperone: a protein that puts zinc into other “client” proteins. The findings, reported in the journal Cell, shed light on the public health issue of zinc deficiency and open an entirely new area of biology for exploration.

“There’s been a huge gap in the field of metal biology, where we have been unable to identify metallochaperones. It’s remarkable because so many proteins require metal cofactors,” said Eric Skaar, PhD, MPH, Ernest W. Goodpasture Professor of Pathology, Microbiology and Immunology and co-corresponding senior author of the Cell paper.

“This is the first identified protein that puts zinc into other proteins,” said Skaar, who is also director of the Vanderbilt Institute for Infection, Immunology, and Inflammation. “We think it may be one of the most important regulatory strategies by which humans cope with severe zinc starvation, which is one of the most important public health issues in the world.”

The researchers found that ZNG1 is conserved from yeast to humans. Using human, mouse and zebrafish versions of ZNG1 as “bait” to discover ZNG-interacting proteins, they identified the enzyme METAP1 as a client for zinc insertion and fully characterized its interaction with ZNG1. METAP1 removes the initial amino acid on about half of newly synthesized proteins, contributing to protein stability, maturation and cellular location.

Co-corresponding senior author David Giedroc, PhD, and his group at Indiana University collaborated on the biochemical studies of ZNG1 and its interaction with and activation of METAP1.

“We think that when the body is starved for zinc, ZNG1 ensures that zinc gets delivered to the most important zinc-containing proteins,” Skaar said. “This opens up an exciting new area of biology, where we have these regulatory factors controlling a number of different physiological processes through metal insertion.”