Site fidelity is the tendency to return to previously visited locations and is common across many species, from fish and birds to mammals and insects 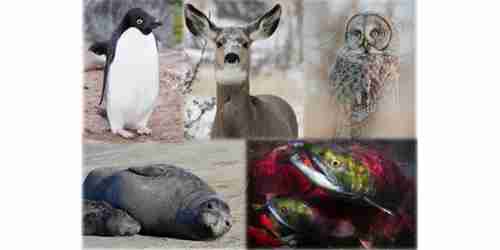 Some wildlife are stuck in their ways.

A team led by researchers at the University of Washington and the University of Wyoming has reviewed the scientific literature and found that, while this “consistent” behavior may be beneficial when environmental conditions don’t change very fast, those benefits may not be realized in the ever-changing world dominated by humans. The research was published Jan. 11 in Frontiers in Ecology and the Environment.

Ecologists use the term “site fidelity” to describe the behavior of animals that are stuck in their ways. Site fidelity is the tendency to return to previously visited locations and is common across many species, from fish and birds to mammals and insects. Think salmon returning to their natal streams to spawn, or birds returning year after year to the same nest site — site fidelity is all around us in nature.

As animals become familiar with a place, site fidelity can help them know where to find good food or hiding spots from predators and can help them move efficiently to and from these resources. However, the authors uncovered an emerging theme in the scientific literature.

“Animals that have strong site fidelity are having a tough time adjusting to the novel landscapes that are showing up around them as a result of humans,” said Jerod Merkle, an assistant professor of zoology and physiology at the University of Wyoming.

Merkle and Briana Abrahms, an assistant professor of biology at the University of Washington, are co-lead authors on the paper. The authors’ broader message suggests that, when confronted by human disturbances or climate change, animals with strong site fidelity may not survive or reproduce as well as animals that have more flexible behaviors. When populations consist of many site-faithful individuals, this can lead to population declines.

In Wyoming, for example, large natural gas fields have been developed in several mule deer winter ranges. Although mule deer can make small shifts in their range to avoid infrastructure, they remain faithful to the same general area rather than abandoning it entirely. Their continued use of those degraded areas following development can have negative consequences. In one long-term study — led by co-author Hall Sawyer of Western Ecosystems Technology, Inc. in Laramie, Wyoming — researchers found a 40% decline in the mule deer population following large-scale energy development in their winter range.

Research by Abrahms and co-author Daniel Costa, a professor of ecology and evolutionary biology at the University of California, Santa Cruz, illustrates how this trend is also playing out as a result of climate change. In female northern elephant seals in the Pacific Ocean, site fidelity is a winning strategy under normal climate conditions. In typical years, site-faithful seals are better able to find food and put on fat than their more flexible counterparts. But, when abnormal climate conditions like an extreme El Niño cause big changes in the ocean ecosystem, behaviorally flexible seals become the winners, and female seals with strong site fidelity are not able to gain as much valuable fat that they need to reproduce.

“Despite each of us working on very different species from one another, our group came together because we all recognized that there was a clear connection between strong site fidelity and species declines,” said Abrahms, who is also a researcher with the Center for Ecosystem Sentinels at the University of Washington. “We all thought it was important to call attention to this connection for other researchers and wildlife managers. Recognizing the types of species or behaviors that may suffer most from human-induced environmental change can help develop conservation priorities and actions.”

While the authors’ synthesis provides a grim sketch of the future for species with strong site fidelity, they also provide an upshot.

“While these species appear to be stuck in their ways, many of them also have some unique but subtle ways of dealing with change,” said co-author Jonathan Armstrong, an assistant professor of fisheries, wildlife and conservation science at Oregon State University.

Every once in a while, an animal does something new, and it works. While such cases are rare, those “innovators” can be key to persistence in changing landscapes.

“We just have to be patient and make sure populations don’t crash before such innovators come along,” said Armstrong.

The authors conclude with a number of suggestions for researchers and practitioners. First, long-term monitoring is key to seeing how individuals and populations respond to change. Second, they suggest that biologists should not expect animals to always use and find the best habitats. This is especially important for restoring new habitat areas, which may not work all that well for species with strong site fidelity because they may not “find” these restored habitats.

Because of this, the authors thirdly suggest that conservation of species with high site fidelity focus on protection and restoration of highly used sites, rather than off-site mitigation.

Additional co-author on the paper is Anna Chalfoun, an associate professor of zoology and physiology at the University of Wyoming and assistant leader with the Wyoming Cooperative Fish and Wildlife Unit.