Research team has discovered that activation of the NLRP3 inflammasome — a protein complex involved in the inflammatory response — in immune cells contributes to salt-sensitive hypertension. 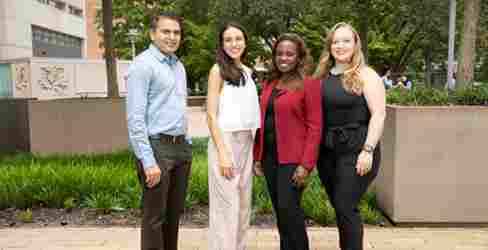 Dietary salt increases blood pressure in some people, putting them at higher risk for cardiovascular disease and death.

A Vanderbilt-led research team has now discovered that activation of the NLRP3 inflammasome — a protein complex involved in the inflammatory response — in immune cells contributes to salt-sensitive hypertension. The findings, reported in Circulation Research, suggest new ways to diagnose and treat this condition.

About 50% of people who have hypertension have an exaggerated increase in blood pressure after consuming a salty meal, as do 25% of people with normal blood pressure, said Annet Kirabo, DVM, MSc, PhD, associate professor of Medicine and senior author of the study.

“The increase in blood pressure in response to salt can be significant enough to cause a heart attack, stroke, and even sudden cardiac death, and yet it’s undiagnosed and goes untreated. It’s a silent killer,” said Kirabo, who is also associate professor of Molecular Physiology and Biophysics.

The percent of affected elderly and African American people is even higher — up to 75%, she added.

Kirabo and her colleagues have been exploring the novel role of immune cells in salt-sensitive hypertension. They previously discovered that the sodium channel ENaC mediates salt entry into immune cells, leading to the formation of reactive molecules called isolevuglandins and an inflammatory, autoimmune-like state in hypertension.

In the current studies led by postdoctoral fellow Ashley Pitzer, PhD, the group used an inpatient protocol of salt loading and depletion to rigorously characterize volunteers as salt-sensitive or not and study responses in their blood cells.

They found that the NLRP3 inflammasome in a specific subtype of monocytes (immune cells) changed dynamically in salt-sensitive people, increasing with salt intake and blood pressure. With data from human volunteers in hand, the researchers turned to mouse models to study the mechanism.

Inhibiting or removing the inflammasome eliminated the salt sensitivity of blood pressure, and adding it back (by transferring blood cells) restored salt sensitivity. They showed that inflammasome activation is dependent on salt entry through the ENaC channel and on production of isolevuglandins.

Pitzer noted that it might be possible to develop a blood test for salt sensitivity of blood pressure.

“We could look at inflammasome activation in these immune cells as a potential biomarker to find out if a patient — with or without high blood pressure — is salt sensitive or not,” Pitzer said. “That could give clinicians another tool for reducing someone’s cardiovascular risks in the future.”

Kirabo said the findings suggest that researchers should look more closely at inhibitors of ENaC and IL-1beta, an inflammatory cytokine produced by the inflammasome. ENaC inhibition has limited efficacy in the treatment of hypertension in the general population, and a previous clinical trial did not show efficacy of blocking IL-1beta on reducing blood pressure — although this trial did not diagnose volunteers for salt sensitivity. Such inhibitors may work to reduce cardiovascular disease risk in people with salt sensitivity.

“We should be taking a precision medicine approach to treat the 50% of people with hypertension who are salt sensitive and the 25% of people who don’t have high blood pressure and don’t know they have this risk of dying suddenly,” Kirabo said. “This is a targetable phenotype.”

The researchers are working to understand how components of the pathway in immune cells are regulated and to characterize the ENaC channel in these cells.