The microbial community of over 100 bacterial species could help scientists learn more about the connections between the microbiome and human health. 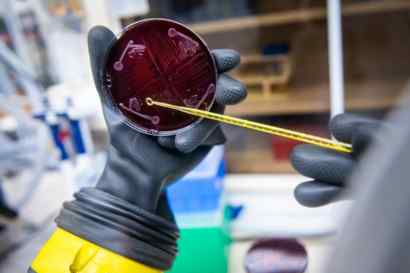 Key studies in the last decade have shown that the gut microbiome, the collection of hundreds of bacterial species that live in the human digestive system, influences neural development, response to cancer immunotherapies, and other aspects of health. But these communities are complex and without systematic ways to study the constituents, the exact cells and molecules linked with certain diseases remain a mystery.

Stanford University researchers have built the most complex and well-defined synthetic microbiome, creating a community of over 100 bacterial species that was successfully transplanted into mice. The ability to add, remove, and edit individual species will allow scientists to better understand the links between the microbiome and health, and eventually develop first-in-class microbiome therapies.

Many key microbiome studies have been done using fecal transplants, which introduce the entire, natural microbiome from one organism to another. While scientists routinely silence a gene or remove a protein from a specific cell or even an entire mouse, there is no such set of tools to remove or modify one species among the hundreds in a given fecal sample.

“So much of what we know about biology, we wouldn’t know if it weren’t for the ability to manipulate complex biological systems piecewise,” said Michael Fischbach, Institute Scholar at Sarafan ChEM-H and corresponding author on the study, published in Cell on Sept. 6.

Fischbach, who is an associate professor of bioengineering and of microbiology and immunology, and others saw one solution: Build a microbiome from scratch by growing individually and then mixing its constituent bacteria.

Each cell in the microbiome occupies a specific functional niche, performing reactions that break down and build up molecules. To build a microbiome, the team had to ensure that the final mixture was not only stable, maintaining a balance without any single species overpowering the rest, but also functional, performing all the actions of a complete, natural microbiome. Selecting species to include in their synthetic community was also difficult given the natural variation across individuals; two people selected at random share less than half of their microbial genes.

The researchers, including a team from the Chan Zuckerberg Biohub, decided to build their colony from the most prevalent bacteria and turned to the Human Microbiome Project (HMP), a National Institutes of Health initiative to sequence the full microbial genomes of over 300 adults.

“We were looking for the Noah’s Ark of bacterial species in the human gut, trying to find the ones that were almost always there in any individual,” said Fischbach.

They selected over 100 bacterial strains that were present in at least 20% of the HMP individuals. Adding a few species needed for some subsequent studies brought them to 104 species, which they grew in individual stocks and then mixed into one combined culture to make what they call human community one, or hCom1.

Though satisfied that the strains could coexist in the lab, the true test was whether their new colony would take root in the gut. They introduced hCom1 to mice that are carefully designed to have no bacteria present. hCom1 was remarkably stable, with 98% of the constituent species colonizing the gut of these germ-free mice, and the relative abundance levels of each species remaining constant over two months.

To make their colony more complete, the researchers wanted to make sure that all vital microbiome functions would be performed by one or more species. They relied on a theory called colonization resistance, which explains that any bacterium, when introduced into an existing colony, will only survive if it can fill a niche not already occupied.

By introducing a complete microbiome, in the form of a human fecal sample, to their colony and tracking any new species that took up residence, they could build a more complete community.

Some were skeptical that this would work. “The bacterial species in hCom1 had lived together for only a few weeks,” said Fischbach. “Here we were, introducing a community that had coexisted for a decade. Some people thought they would decimate our colony.”

Remarkably, hCom1 held its own, and only about 10% of cells in the final community came from the fecal transplant.

They found over 20 new bacterial species that inserted themselves in at least two of their three fecal transplant studies. Adding those to their initial community and removing those that failed to take root in mouse guts gave them a new community of 119 strains, dubbed hCom2. This second iteration, still made from individually growing and then mixing the constituents, made mice even more resistant to fecal challenges than the first.

To demonstrate the utility of their synthetic microbiome, the team took hCom2-colonized mice and challenged them with a sample of E. coli. These mice, like those that were colonized with a natural microbiome, resisted infection.

Prior studies have shown that a healthy natural microbiome leads to protection, but Fischbach and colleagues could take this a step further by iteratively eliminating or modifying certain strains to determine which ones specifically conferred protection. They found several key bacteria and plan to conduct further studies to narrow down to the most critical species.

Fischbach believes that hCom2, or future versions of it, will enable similar reductionist studies that reveal the bacterial agents involved in other areas, like immunotherapy responses.

“We built this consortium for the broader research community. We want to get this into as many hands as possible to have an impact on the field,” said Fischbach.