Habitat loss interacting with severe weather conditions cause a food shortage that drives hungry bats closer to human populations, where they infect intermediary hosts and can infect people. 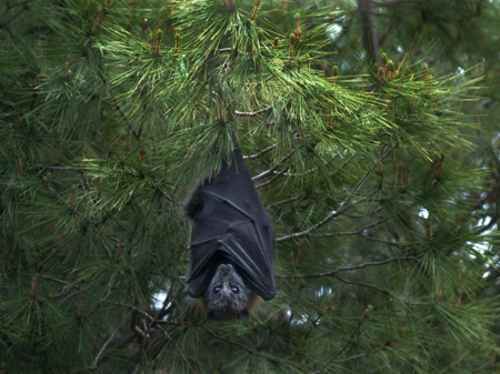 Researchers found that bats disrupted by a lack of habitat and food move near humans in agricultural and urban areas, where they can spread Hendra virus to horses and then people. Credit: Vlad Kutepov, Unsplash. All Rights Reserved.

Preserving and restoring natural habitats in specific locations could prevent pathogens that originate in wildlife from spilling over into domesticated animals and humans, according to new research led by an international team of researchers, including Penn State.

The research, undertaken in Australia, found that when bats experience a loss of winter habitat and food shortages in their natural settings, their populations splinter and they excrete more virus. Bats disrupted by the lack of food move near humans in agricultural and urban areas. The team studied Hendra virus, a lethal virus that spills over from fruit bats to horses and then infects people.

“One of the biggest challenges we face are threats arising from bat-borne viruses that spillover into humans and have the potential to cause pandemics. Ebola, MERS, SARS, SARS-CoV-2, Nipah and Hendra are all good examples of this,” said Peter Hudson, Willaman Professor of Biology, Penn State. “The response to the pandemic has been to find ways to speed up vaccine development, but since infections invariably spread much faster than vaccine rollout, this reactive response will never stop a pandemic. Instead, the solution lies with preventing viral spillover from bats to humans .”

The team’s research, published on Nov. 16 in Nature, combined multiple datasets over 25 years on bat behavior, distributions, reproduction and food availability, along with records of climate, habitat loss and environmental conditions. To link these data and seek insight into the causes the researchers utilized Bayesian network models.

They documented more than 60 Hendra virus spillover events during the 25-year period. While previous research has shown correlations between habitat loss and occurrence of pathogen spillover, this study reveals for the first time a mechanism for how and why viruses pass from bats to people. Furthermore, their work provides a method to both predict and prevent them.

“Normally bats live in large aggregations with thousands of bats in camps and they will move over large distances for their sugar rich nectar. We discovered that following a severe El Nino climatic event (high temperatures in the Pacific), the cold and rainy weather stops flower production,” said Hudson. “With a lack of food, the young of the bats die and the starving adults move off into small aggregations where they start shedding virus – often in habitats they have never been seen in before.”

“In agricultural areas, the bats shed the virus when they regurgitate half-eaten fruit or pass the virus in urine and feces onto the pasture where horses are grazing. The horses then get infected with the Hendra virus and exhibit serious neurological symptoms” said Hudson. “And when the concerned owners come to examine the sick horse they get a large dose of the fatal virus.”

To their surprise, the researchers discovered that when remaining stands of eucalyptus trees bloomed in winter, large numbers of bats flocked to these areas. During those flowering events, pathogen spillover ceased immediately. Hudson said, “it was like the perfect experiment – any unexpected flowering event stopped spillover immediately.”

“We think this shows how important native habitat restoration is, and we are developing ideas for restoring critical food trees for bats, in effect planting trees for human health,” said Hudson.

Raina Plowright, professor in the Department of Public and Ecosystem Health in the College of Veterinary Medicine, added, “Right now, the world is focused on how we can stop the next pandemic. Unfortunately, preserving or restoring nature is rarely part of the discussion. We’re hoping that this paper will bring prevention and nature-based solutions to the forefront of the conversation.”