Cornell researchers have revealed the nanomechanics inside a promising material for applications such as fuel cells and hydrogen production. 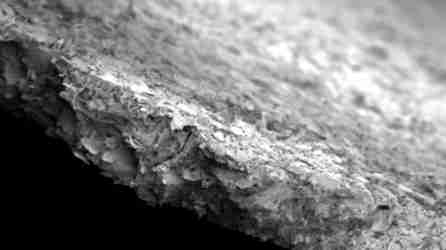 Scanning electron microscopy of a cross section of a barium zirconate-based ceramic.

Cornell researchers have revealed the nanomechanics inside a promising material for applications such as fuel cells and hydrogen production, and the findings are changing assumptions about the material’s durability.

Proton-conducting ceramics are a class of material that, in theory, provide everything one would want in an efficient and durable fuel cell electrolyte – they’re chemically stable and can transport hydrogen ions efficiently at preferred temperatures. However, the mechanical strength of proton-conducting ceramics has so far failed to live up to expectations, and their localized performance at desired temperatures has remained unverified.

A research team led by Andrej Singer, assistant professor of materials science and engineering, used a coherent X-ray diffraction technique to look in-situ at a sample of a barium zirconate-based ceramic and discovered unexpected structural activity believed to be the mechanism behind the material’s lack of durability in fuel cells. The results were published in the Sept. 5 issue of the journal Advanced Science.

“We saw a much higher level of structural activity than we expected and this material has a very active inner life,” said Oleg Gorobtsov, postdoctoral associate and lead author of the study. “Cracking and non-equilibrium defects constantly develop in the material we had expected to be much more stable at the nanoscale.”

The findings overturn what had been an assumed advantage of proton-conducting ceramics. While most solid fuel cells operate at 400-600 degrees Celsius, proton-conducting ceramics were thought to be a stable, durable fuel cell material even at temperatures as low as 200 degrees, meaning they could enable efficient electricity generation with less energy being lost in the form of heat.

The findings, however, do not mean the material is no longer valued as a potential solution for high-efficiency fuel cells, according to Singer.

“Green hydrogen technologies are a potential pillar for sustainable energy solutions in the future,” said Singer, whose research group has been using various X-ray techniques to gain an unprecedented vision of energy technologies. “Understanding the fundamental mechanisms in-situ and operando can help generate new design ideas of how to mitigate degradation and eventually make durable materials.”

Singer added that the surprising performance of proton-conducting ceramics at relatively low temperatures has inspired his research group to use X-ray techniques for similar in-situ analyses of other materials.

“Because we found the proton-conducting ceramics to change the structure so readily, we plan to look into other ceramic conductors, particularly for lithium-ion batteries,” Singer said.

Study co-author Jin Suntivich, an associate professor of materials science and engineering whose research group investigates materials for energy storage and hydrogen production, further highlights the need to understand the durability of the proton-conducting ceramics.

"These proton-conducting ceramics have tremendous potential for energy storage applications, but their stability has been difficult to understand,” Suntivich said. "X-ray techniques give us a unique window to see how they degrade and what we can do to mitigate the issue.”