The study highlights the role of genes inherited from mothers in genetic diseases in children, and improves the understanding of such diseases. 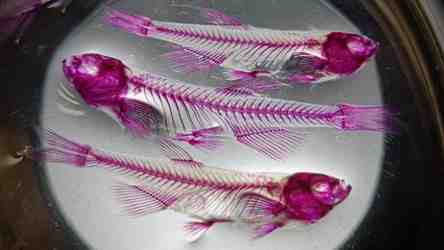 SMCHD1 maternal gene 2. Zebrafish offspring with different skeletal patterns caused by the removal of the SMCHD1 gene in the mothers.

The development of an embryo is a well-orchestrated string of processes, ensuring correct formation and positioning of vital organs of the growing organism. At the molecular level, these processes are controlled in a precise manner by switching on or off specific factors such as genes or proteins. Any errors in these processes could result in physical defects or disease in the newborn organism.

A team of scientists from the National University of Singapore (NUS) led by Assistant Professor Xue Shifeng from the Department of Biological Sciences has discovered a new way to interpret unsolved Mendelian diseases – diseases inherited from either parent due to gene mutations in the developing egg or sperm – through studying the inheritance of a protein known as SMCHD1 which is coded by the SMCHD1 gene. Mutations in the SMCHD1 gene can cause diseases such as facioscapulohumeral muscular dystrophy (FSHD) which is a muscle degenerative disorder, and Bosma arhinia microphthalmia syndrome (BAMS) which causes abnormalities of the nose and eyes.

The researchers found that SMCHD1 from mothers controls the expression of a group of genes in offspring, known as the HOX genes, which determines the position of body parts in an embryo along the axis from its head to tail. The researchers also found that the inactivation of SMCHD1 in female zebrafish results in alterations to HOX gene expression leading to skeletal defects in their offspring.

The study led by NUS researchers, in collaboration with A*STAR, Yale-NUS and Aix-Marseille University, was published in Nature Communications on 23 June 2022.

In mammals, SMCHD1 plays a key role in X-inactivation in females, a process where one of the copies of the X chromosome is randomly selected and disabled. This makes it challenging to study the role of the SMCHD1 gene inherited from mothers because inactivating the SMCHD1 gene is lethal for female mammals.

The research team decided to use zebrafish, a vertebrate commonly used as a model organism in biomedical research, to circumvent this issue. Zebrafish lack X-inactivation, allowing the team to study the role of the SMCHD1 gene inherited from mothers. The researchers inactivated the SMCHD1 gene in zebrafish to study how it will affect gene expression and structural development in zebrafish offspring.

NUS scientists observed that SMCHD1 protein is placed into the egg by the mother. The inactivation of the SMCHD1 gene in female zebrafish caused alterations in HOX gene expression in their fertilised eggs. HOX genes play an important role in ensuring the specific patterns and identities of different body parts in the baby. The loss of the SMCHD1 gene resulted in premature activation of HOX genes resulting in skeletal patterning defects in the zebrafish offspring.

Asst Prof Xue and her team demonstrated a new concept that gene products such as proteins from the mother’s egg can control gene expression occurring in the developing embryo. Factors that control gene expression produced by the mother in the developing egg can set up the conditions for proper gene activation after the egg is fertilised with a sperm. Through further lab studies, the team found that the same principle applied to mammals.

The results of the study could change the way unsolved Mendelian diseases are interpreted. Based on this study, some genetic abnormalities in parents could manifest in their children, opening possibilities of explaining birth defects seen in children by examining the genetic make-up of their parents.

“When we think about genetic diseases, we usually think that a mutation in the patient caused the disease. In our study, we found using zebrafish, the abnormalities in the offspring are not caused by a genetic mutation in the individual but in its mother. This will change how we think about unsolved inherited diseases,” said Asst Prof Xue.

Following their current study, the researchers hope to continue exploring how, at the molecular level, maternal genes control embryo gene expression after birth.

“We want to understand, molecularly, what marks are left by the maternal SMCHD1 gene on the offspring’s genome that will affect the embryo. We are also interested in studying the SMCHD1 protein, its mutations that are involved in different diseases, as well as how it works,” shared Asst Prof Xue.