Study shows that much of this diversity is driven by a relatively recent innovation among bony fish — feeding by biting prey from surfaces. 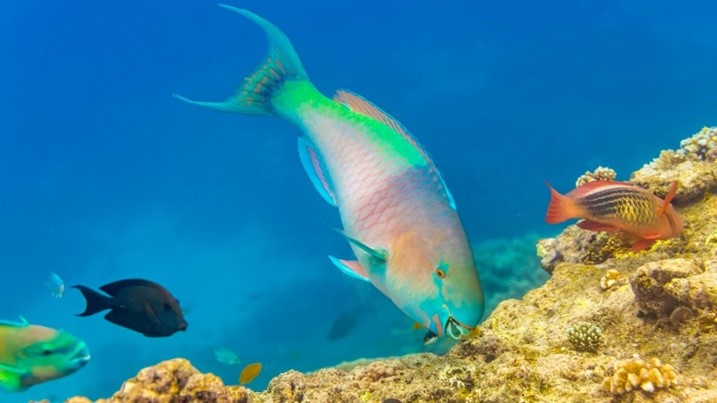 Reef fish evolved the ability to feed by biting prey from surfaces relatively recently, a UC Davis study shows. The innovation has driven an explosion of evolution in reef fish. Image shows a rainbow parrotfish on the Great Barrier Reef, Australia. (Getty Images)

Coral reefs are home to a spectacular variety of fish. A new study by biologists at the University of California, Davis, shows that much of this diversity is driven by a relatively recent innovation among bony fish — feeding by biting prey from surfaces. The work is published the week of July 25 in Proceedings of the National Academy of Sciences.

Although jawed fish appear in the fossil record almost 500 million years ago, feeding by grazing, nibbling or gnawing food off rocks and corals didn’t appear among the teleosts (the group that includes most bony fish) until after the dinosaur-killing mass extinction at the end of the Cretaceous period, about 60 million years ago, according to the new study.

“There may have been some biting done by teleosts before the end-Cretaceous, but our reconstructions suggest that it was very uncommon,” said Katherine Corn, graduate student in the UC Davis Department of Evolution and Ecology and Center for Population Biology, and lead author on the paper.

Modern reef fish feed in a variety of ways. Many suck floating food into their mouths by rapidly expanding their heads. This suction feeding is thought to be ancestral in teleosts. A smaller number are “ram biters,” which catch food by essentially swimming onto it with their mouths open.

Many reef fish, including iconic species such as parrotfish, butterflyfish and triggerfish, bite their food off hard surfaces. This gives them access to prey such as snails and shellfish, echinoderms, anemones, algae and other animals and plants that may be quite firmly stuck to the substrate.

Corn, working with Professor Peter Wainwright and other colleagues in the UC Davis Department of Evolution and Ecology, classified 1,530 living species of reef fish by feeding method, then mapped them onto an evolutionary tree of the teleosts. They also studied the rate of body shape evolution in all of these fish.

They found that at the end of the Cretaceous, nearly all of the fish in these lineages were suction feeders. Today, four in 10 reef species are “benthic biters” that browse on the substrate. The biting species are evolving in body shape at almost twice the rate of suction feeders, they discovered.

What set off these changes? The end of the Cretaceous saw changes in coral reefs, with more complex and branching structures that made grazing more productive. At the same time, teleosts evolved shorter jaws that were better for biting.

“These two changes together really opened up biting as an effective mode for fishes,” Corn said. Biting allowed reef fish to access diverse new prey, promoting the evolution of a wide variety of body shapes, she said.

“So once biting evolved, it was really able to take off, and this may explain the high rates of body shape evolution and diversity of biters that we see,” Corn said.