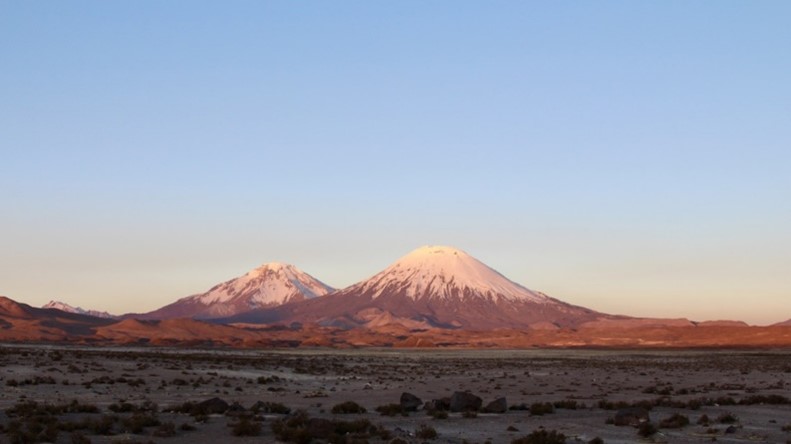 Parinacota Volcano, in the Atacama Desert of Chile.

A new study co-led by a Cornell researcher has identified serpentinite – a green rock that looks a bit like snakeskin and holds fluids in its mineral structures – as a key driver of the oxygen recycling process, which helped create and maintain the sustaining atmosphere for life on Earth.

“This cycle is a really a big deal,” said Esteban Gazel, associate professor of earth and atmospheric sciences in Cornell’s College of Engineering, and co-lead author on the study. “In the end, we’re talking about the budget of oxygen on the planet and how that gets balanced through processes like subduction.”

Earth is constantly recycling its life-giving supply of water and oxygen as tectonic plates sink, or subduct, deep into the planet. Elements are carried down as one piece of the planet’s crust slips below another, and resurface through the resulting volcanoes.

It’s a critical process, but how, exactly, subduction recycles oxygen and allows it to interact with other elements has always been a topic of debate among geoscientists.

The new finding was published Nov. 26 in Science Advances and changes how geoscientists understand the underlying process of Earth’s geochemical cycle. The reason geoscientists had, until now, failed to make this discovery was because of something the COVID-19 pandemic had provided Gazel – time to look at massive amounts of data.

Using volcanoes to probe the deep Earth, past studies have examined oxygen levels in the Earth’s mantle – the magma-filled layer directly under the crust – for clues. Some geoscientists have pointed to increased oxidation below volcanic arcs, where the hydrated oceanic lithosphere sinks into the mantle. A leading theory had been that ocean water delivering hydrogen into the mantle was influencing its oxidation state, but the new study found that oxygen is entering the mantle in fluids derived from “heated and pressurized” serpentinite rocks.

Below the sea floor, the process of serpentinization creates rocks that trap highly oxidizing fluids inside, and these serpentinites eventually get subducted back into the mantle.

“Eventually, those serpentinite juices are going to be squeezed from the slab,” said Gazel, who is also a faculty fellow at the Cornell Atkinson Center for Sustainability. “Depending on the angle and the thermal conditions of the subducting slab, those fluids are released and they oxidize the mantle below volcanoes.”

With travel restrictions and his laboratory under construction, Gazel and his colleague Yuxiang Zhang from the Institute of Oceanology, Chinese Academy of Sciences spent time in 2020 carefully analyzing every existing dataset for single arcs and their lava compositions. Adding to the analysis were serpentinization expert Frieder Klein and chemical thermodynamics expert Glenn Gaetani, both scientists from the Woods Hole Oceanographic Institution.

“We were looking at the correlation with different processes,” Gazel said. “For instance, there were some regional datasets that correlated the thickness of the crust with oxidation, but it just didn’t make sense once we made our study global.”

Once enough datasets had been combined, certain correlations were eliminated while the correlation between serpentinization related fluids and oxidization became evident. Specifically, the subduction system’s thermodynamic conditions and geometry proved to control the dehydration of serpentine and the oxidation state of the mantle, with steeper, colder subduction zones providing more oxidization.