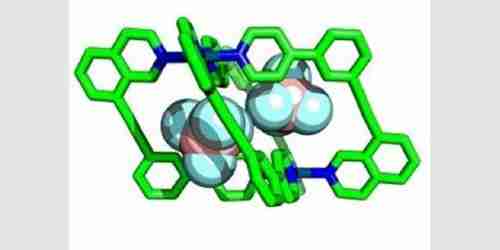 Enzymes perform essential chemical and biological processes by taking biomolecules into cavities within their structures and facilitating important reactions. Chemists have attempted to emulate this with ‘molecular cages’ – chemical structures that contain cavities that can bind smaller molecules within, called ‘guests’. Now, researchers from the Department of Chemistry at Imperial College London have used a computer-driven approach to predict the results of cage-building reactions with high precision. This will help chemists select the ideal building blocks to prepare cages with desirable structures and properties before trying to synthesise them in the lab, minimising unsuccessful experimentation. The study is published in the journal Angewandte Chemie.

Currently, to simplify their synthesis, most cages and their cavities are highly symmetric. However, this limits the design of cages for potential guest molecules. This contrasts with natural enzymes’ ability to be highly selective in which molecules can bind with them.

Researchers at Imperial are developing ways to assemble cages with lower symmetry, allowing more guest-specific cavity shapes, by using more complex components in their construction. By using unsymmetrical building blocks, ‘wonky’ cages with interesting cavity shapes can be created. However, unsymmetrical building blocks are more difficult to create because the outcomes of the ‘self-assembly’ reactions needed to construct them are harder to predict. Failed reactions can result in the formation of an undesirable molecule, or even a mixture of products, rather than the single target structure. All this means constructing new cages can be a time-consuming and costly trial-and-error process, with lots of wasted effort. The new approach instead analyses computational models of potential cages to make predictions about their self-assembly. The predictions use the energy and geometry of the computationally constructed cages and are good guides for whether a self-assembly process will lead to a single structure. This information can then be used to select target cage molecules to prepare in the lab.

The team used software called stk, previously developed at Imperial, to build the computational models. As well as having large predicting power, the calculations are also very rapid, taking only a few hours on a common desktop PC. Based on the computational data, the team selected a number of building blocks to synthesise in the lab. They found that the approach successfully predicted the experimental outcomes of the self-assembly process. This allowed them to prepare several new low-symmetry ‘wonky cages’ that had never been synthesised before and verified the usefulness of the calculations for predicting which molecules would form.