Inspired by the structure of muscles, an innovative new strategy for creating fiber actuators could lead to advances in robotics, prosthetics, and smart clothing, 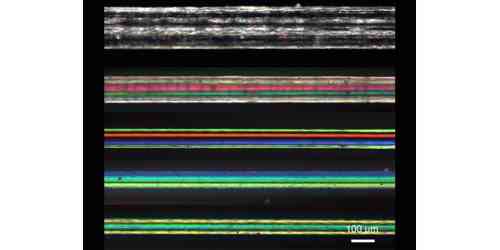 Differential interference contrast (DIC) images of strain crystallized fibers that are 1X-5X the initial hydrated length. The image indicates that the alignment of the fibers increases along the fiber axis with increasing elongation ratio.  Credit: Penn State . All Rights Reserved.

Inspired by the structure of muscles, an innovative new strategy for creating fiber actuators could lead to advances in robotics, prosthetics, and smart clothing, according to a Penn State led team of scientists who discovered the process.

“Actuators are any material that will change or deform under any external stimuli, like parts of a machine that will contract, bend or expand,” said Robert Hickey, assistant professor of materials science and engineering at Penn State. “And for technologies like robotics, we need to develop soft, lightweight versions of these materials that can basically act as artificial muscles. Our work is really about finding a new way to do this.”

The team developed a two-step process to make fiber actuators that mimic the structure of muscle fibers and that excel in several aspects compared to other current actuators, including in efficiency, actuation strain and mechanical properties. They reported their findings (June 2) in the journal Nature Nanotechnology.

“This is a big field and there’s a lot of exciting research out there, but it has been really focused on engineering materials to optimize properties,” Hickey said. “What makes our work exciting is we really focus on the connection between chemistry, structure and property.”

Hickey previously led a team that produced self-assembling, nanostructured hydrogel materials. Hydrogels are networks of polymers that can swell and hold large amounts of water while maintaining their structure.

In the new research, the scientists found that fibers made of this hydrogel material can stretch several times their original length when hydrated and harden and lock in the elongated shape when dried in the extended state. Adding water or heat allows the material to snap back to its original size, making it promising for use as an actuator, the scientists said.

The exceptional stretching properties of the hydrogels are a result of the combination of rigid amorphous nanoscale domains and micrometer scale pores filled with water. When the hydrogels are stretched, they snap back like a rubber band. If the stretched fibers are dried in the extended state, the polymer network will crystallize, locking in the elongated shape of the fibers.

“We think one of the fundamental reasons we have these exceptional properties is that the fibers are organized very precisely at the nanometer scale, similarly to the sarcomere of a human muscle,” Hickey said. “What’s happening is you have a uniform contraction. These amorphous domains are all organized precisely along the fiber, and that means they contract in a single direction, which gives rise to this ability to come back to that original state.”

Applying water or heat to the stretched materials melts the crystals and allows the material to return to its original form. When stretched to five times its original length, the material can return to within 80% of its size and can do this over many cycles without performance decline, the scientists said.

“The fact that we can use two different stimuli, heat and water, to trigger actuation opens up double the possibilities for materials made with this method,” Hickey said. “Most actuators are triggered by a single stimulus. Dual stimuli open up the versatility of our materials.”

Other Penn State researchers on this project were Elisabeth Lloyd and Yifan Xu, doctoral candidates, and Yifan Xu, who recently graduated with a bachelor’s degree in materials science and engineering.

Also contributing were Chao Lang, a former postdoc at Penn State and now a professor at South China University of Technology, and Venkat Ganesan, Rui Huang and Manish Kumar, professors at the University of Texas at Austin.