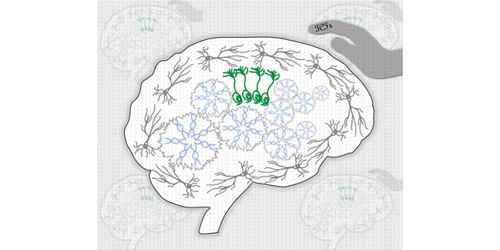 Two recent publications from Dr. Hiyaa Ghosh’s team have one key message - The brain is only as healthy as the genetic program in its cells. The team investigated brains of adult mice by peeking into the genetic program of mature neurons and adult neural stem cells. This uncovered some unanticipated latent tendencies of these cells. In a healthy brain, such tendencies could bring about harmful and unwelcome changes, which can eventually lead to neurological disorders. So, how does the brain stay sane? Interestingly, a protein called Tcf4 proactively subverts such detrimental possibilities in the cells and helps maintain a healthy genetic landscape. The team believes that their results are valuable in understanding how normalcy is maintained in the adult brain, and therefore the studies are contextual for neuroinflammatory, neurodegenerative and cognitive disorders, as well as regenerative studies.

When one is in conversation with Hiyaa, it is like entering the movie theatre to watch your favourite star’s movie. Your surroundings blur, the excitement is palpable and most importantly, you realize that the story is bigger than the star. Her team’s latest discovery is one such riveting story of how the brain maintains its poise within the holy mess of neurons and other cells.

A healthy brain is like a delicately flavoured soup. It contains the right proportion of various cell-types, each contributing to the overall brain function. However, unlike a meek soup (that may have a dozen ingredients blending in), the brain has numerous types of neurons and other cells housed in specific regions of the brain, making it rather complex to study.

Therefore, Hiyaa prefers to keep her questions specific to each ‘cell-type’.

“We seek to understand the genetic programs that control normalcy in the brain at the resolution of each type of cell. To get to the DNA blueprint of a heathy brain, we perturb healthy cells through gene-manipulation to get readouts that show deviations from status quo. Correlating these deviations with genetic alterations allows us to gain insight into what underlies ‘normalcy’. These cell specific genetic programs are what our lab is looking for,” she explains.

Early in her career, Hiyaa had worked with the gene Tcf4, which encodes for a protein that controls the expression of various other genes. She noticed that this gene is persistently expressed in the adult brain in many different cell types, and was implicated in neurodevelopmental and psychiatric diseases.

“Since Tcf4 is continually expressed in many brain cells in the steady-state, it is likely to be doing something very relevant for normal functioning of those cells. Now, if we could delete it in a ‘cell-type’ specific manner in the adult brain, we could possibly identify the various genes that it controls in those cells, and then chart out the genetic program that helps maintain those brain cells healthy,” she says.

Thus, two teams set out to open the brain’s genetic manual, with Tcf4 as their Swiss Army Knife.

Dipannita Sarkar, using some cool genetic tricks, knocked out Tcf4 from a specific class of excitatory neurons in the adult brain. These neurons have an established functional, physiological and positional identity. However, in the absence of Tcf4, the neurons lost some of their most basic structural and electrophysiological properties.

To identify the underlying gene signatures, Dipannita decided to sequence the active genome of these particular neurons.

“Isolating the neurons of interest from a haystack of other brain cells was the major challenge. It took us a lot of time and iterations to get a respectable number of live and healthy neurons, which we could use for sequencing,” says Dipannita.

But the effort was rewarding. Her data revealed that mature neurons have the hidden propensity to change their dendritic structure and membrane properties, but Tcf4 functions like a genetic brake and ensures that neurons maintain their functional and structural integrity.

“This is really exciting. It tells you that once a neuron has fully developed, it is not a done deal. Certain gene regulatory networks need to keep running to maintain both its structure and function,” explains Hiyaa.

Independently, at the other end of the lab, Mohammad Shariq carried out experiments where he knocked out Tcf4 from adult neural stem cells (aNSCs). aNSCs are neuronal precursors that sit in certain parts of the adult brain and continually generate new neurons of a certain type that participate in specific tasks performed by the hippocampal circuit.

Firstly, he observed that without Tcf4, aNSCs were weaned off their proliferative capabilities. Further genetic analysis revealed a ‘suppressor’ role for Tcf4 where it was actively extinguishing the inflammatory potential of the aNSCs. In fact, the Tcf4 knockout NSCs were not only transforming into vicious inflammatory cells and unable to make neurons anymore, but were also secreting harmful factors that affected cells in the neighbourhood.

Mohammad is positive and excited about these findings. He says, “Diseases such as Alzheimer’s are often presented with neuroinflammation. Our data could potentially pave the way to gain better understanding of such neurodegenerative diseases where the origin of disease pathology is poorly understood.”

Were there cognitive changes as a result of these transformations? Well, Dipannita’s mice, with Tcf4 absent in their excitatory neurons, lost the ability to retain contextual memories and Mohammad’s mice (the ones with Tcf4 knocked out in the aNSCs) showed inflammation in the hippocampus, and concomitant deficits in novelty recognition. Thus, the deviations that a single genetic change caused were enough to alter the form and function of the well-established cells in the adult brain, leading to neurological decline.

“Overall, our work shows that there is an active genetic program that maintains a mature neuron’s structure and function. Similarly, a proactive genetic program maintains the neurogenic nature of the adult neural stem cells, revealing that they have an inflammatory potential tucked inside – a dark side that no one expected,” concludes Hiyaa. She tells me that these are exciting times when so much is possible in terms of looking into the blueprint of a living organism and finding the extraordinarily intelligent plans of nature.

As we wind up our conversation, we discuss the many challenges that the team had to endure to reach these scientific revelations.

But at the end, their efforts were all well worth it and their story is one that begs for a sequel.

These findings have been reported independently in two papers and published in the journals Science Advances and Translational Psychiatry.