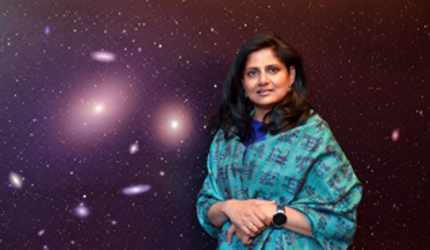 Priyamvada Natarajan, a Yale astrophysicist who explores cosmology, gravitational lensing, and black hole physics, is being honored with a Liberty Science Center (LSC) Genius Award for her extensive body of work mapping the unseen universe.

The awards, created in 2011, celebrate innovation, accomplishment, creativity, science, and technology. They are presented at an annual “Genius Gala” that has raised nearly $19 million for LSC’s STEM education programs.

“I am deeply grateful and humbled by this award and recognition,” said Natarajan, who is a professor of astronomy and of physics and incoming chair of the Department of Astronomy in Yale’s Faculty of Arts and Sciences. “My own love affair with the cosmos started when I was a kid growing up in India visiting the Nehru Planetarium in New Delhi regularly.

“It is a real honor and privilege to be a scientist and engage deeply with our wondrous and mysterious universe and be able to share insights, exciting results, and most of all the thrill of discovery with everyone.”

Natarajan is also director of Yale’s Franke Program in Science and the Humanities.

Natarajan will spend this summer as the Schroedinger Visiting Professor at the Pauli Center for Theoretical Studies in Zurich, Switzerland, jointly hosted by ETH Zurich and the University of Zurich. Eminent theoretical physicists appointed to this chair are invited to give a general theory colloquium (the Schroedinger Lecture), as well as a short course on a more specialized topic. Natarajan will give the Schroedinger Lecture on her work mapping dark matter and a short course on the formation of the first black holes. She will be the first woman to be conferred with this honor.

Natarajan joined the Yale faculty in 2000. She is the author of the award-winning book “Mapping the Heavens: The Radical Scientific Ideas that Reveal the Cosmos” (Yale University Press), and her groundbreaking research focuses on unseen material such as dark matter, dark energy, and black holes.

Fellow Genius Award honorees this year are Hugh Herr, co-director of the Center for Extreme Bionics at the MIT Media Lab; and Robert Montgomery, pioneer of both the laparoscopic procedure for live kidney donation and the practice of domino-paired kidney swaps.

The Liberty Science Center is a 300,000-square-foot, not-for-profit learning center located in Liberty State Park on the Jersey City bank of the Hudson near the Statue of Liberty. Dedicated to inspiring the next generation of scientists and engineers and bringing the power, promise, and pure fun of science and technology to learners of all ages, LSC houses a planetarium, 12 museum exhibition halls, a live animal collection with 110 species, giant aquariums, a 3D theater, live simulcast surgeries, a tornado-force wind simulator, K-12 classrooms and labs, and teacher-development programs.