Primate orphans have it tough even before mother dies

Primates born in last 4 years of mom's life have it tough, and so do their children 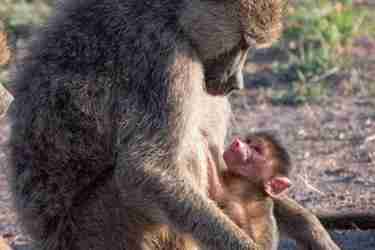 Young baboons and other primates born in the last four years of a female’s life have a greater risk of dying young. If they survive their mother’s death, their own children are also likely to suffer a premature death. (Fernando Campos)

It’s no surprise that losing your mother is bad for you. What is surprising is that the troubles start even before she dies, according to a new study comparing life histories of several species of primates.

The study from Duke University shows that kids born in the last four years before a female’s death are more likely to die at a young age, before their mother dies. If these kids make it, the negative effects of losing their mother will reach across generations, lessening the survival of their future children as well.

The findings appear on Dec. 21 in the Journal Proceedings of the National Academy of Sciences (PNAS).

A team of researchers led by Matthew Zipple, a PhD candidate in Biology, used data collected across decades on seven species of primates from multiple regions of the world. Knowing which mothers had died and when, researchers started by looking at the survival of these doomed mothers’ offspring.

“In the last four years of these females’ life, any baby that they have is at risk,” said Susan Alberts, a professor of biology and evolutionary anthropology at Duke and senior author on the paper.

To rule out the effects of old age, the authors tested whether the age at which the mothers had their offspring had any impact on the likelihood of their offspring dying. They found no effect of maternal age at all.

“I was surprised at the consistency of those results across the board for these species, since they live such different lives,” said Zipple.

Rather than age, general condition could explain this pattern: mothers who were about to die could be unable to properly care for their offspring. If these mothers had a hard time taking care of their own needs, their offspring would be more likely to die young.

Or, grief following the death of a child may precipitate the mother’s death. Mothers distressed by the loss of their offspring may die soon after suffering this loss.

According to Alberts, the mother’s condition is likely to be a factor in almost every species. The grief effect, however, may vary between species, or even between individuals.

The team then shifted their focus to females that had survived their mother’s loss. These daughters were also more likely to lose their young kids to a premature death.

The early death of these grandchildren points towards the effects of poor maternal condition. Orphaned daughters are also likely to be in bad shape. If they survive childhood, they are at great risk of losing their own children.

In primates, mothers take care of their young for years, way past the age of weaning. Mothers teach their offspring how to find food, pick parasites from their fur, and help them find a place in their social group.

Losing their mothers before this apprenticeship is over is detrimental to these young. Even worse, mothers who are not in great shape may not be very good at teaching their young in the years before their death. If these offspring survive infancy, they are less able to properly care for their own babies, who may also have inherited their mother’s poorer health.

“It’s both things: these females don’t learn enough from their mothers, and suffer all sorts of developmental problems due to being orphaned in early life,” said Zipple.

One of the exceptions to these patterns were gorillas, for whom the future death of a mother does not seem to have the same effect as in other species. Gorillas are a species where multiple individuals of the social group help care for the young. This diffuse strategy of care may help dilute the impact of a mother’s death.

The authors point out that similar effects of maternal loss might also be seen in humans, and other long-lived non-primate species where mothers and offspring share an important bond, such as hyenas, elephants, and whales.

The collaboration among primate studies was funded by the National Evolutionary Synthesis Center (NESCent), the National Center for Ecological Analysis and Synthesis (NCEAS), the Princeton Centers for Health and Wellbeing and the Demography of Aging, and the Princeton Environmental Institute. Matthew Zipple was funded through an NSF GRFP fellowship.