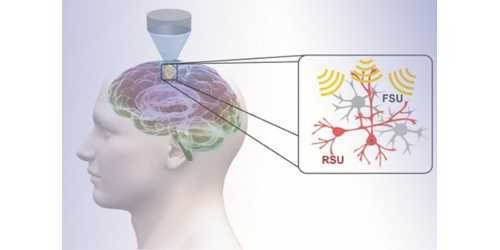 Parkinson's disease, epilepsy and insomnia are just a few of the neurological disorders that use neuromodulation treatment techniques today. Neuromodulation delivers controlled physical energy to the nervous system to treat and improve patients' quality of life. Current neuromodulation approaches, while effective, bring both drawbacks and limitations. The latest research from Carnegie Mellon University's He Lab has demonstrated that non-invasive neuromodulation via low-intensity ultrasound can have cell-type selectivity in manipulating neurons. "Deep brain stimulation, which is highly successful, but an invasive form of electric stimulation through implanted electrodes, is one example of how neuromodulation is being used in a clinical setting today," explained Bin He, professor of biomedical engineering at CMU. "Medical professionals have also used non-invasive transcranial magnetic stimulation and transcranial current stimulation, both of which lack the ability to specifically focus on the neuro-circuit level. My group is interested in helping to develop a more effective and completely non-invasive alternative."

Low-intensity transcranial focused ultrasound, or tFUS, is an emerging and fully reversable neuromodulation technology. It is non-invasive, precise and does not require surgery. During tFUS neuromodulation, pulsed mechanical energy is transmitted through the skull, with high spatial resolution and selectivity, at highly targeted brain regions, which can be steered to elicit activation or inhibition through parameter tuning. In work recently published in Nature Communications, He's group demonstrated, for the first time, that specific cell types can be targeted through tFUS neuromodulation. Their study found that excitatory neurons showed high sensitivity to ultrasound pulse repetition frequency, while inhibitory neurons did not. This finding is significant, demonstrating the first non-invasive neuromodulation technique to modulate a selected cell subpopulation that can be directly translated for human use. With the demonstrated capability of tFUS to activate excitatory or inhibitory neurons, future applications may lead to precise targeting of brain circuits using focused ultrasound energy and activate or inhibit selected sub-populations of neurons by tuning ultrasound parameters. The application of this research has broad implications; it's not just limited to one disease. For many people suffering from pain, depression and addition, He believes non-invasive tFUS neuromodulation could be used to facilitate treatment. "If we can localize and target areas of the brain using acoustic, ultrasound energy, I believe we can potentially treat a myriad of neurological and psychiatric diseases and conditions," said He.