Plants can help to slow climate change, but cannot stop it 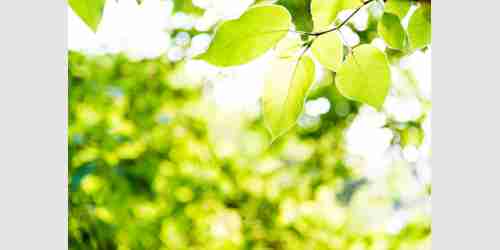 A new study finds that plants are photosynthesizing more in response to more carbon dioxide in the atmosphere, but nowhere near enough to remove all emissions. (Credit: baona/iStock)

Because plants take up carbon dioxide from the atmosphere and convert it into food, forests and other similar ecosystems are considered to be some of the planet’s most important carbon sinks. In fact, the United States and many other countries that participated in last month’s UN Climate Change Conference have made nature-based solutions a critical feature of their carbon dioxide mitigation framework under the Paris Agreement.

As human activities cause more carbon dioxide to be emitted into the atmosphere, scientists have debated whether plants are responding by photosynthesizing more and sucking up even more carbon dioxide than they already do – and if so, is it a little or a lot more. Now an international team of researchers led by Lawrence Berkeley National Laboratory (Berkeley Lab) and UC Berkeley have used a novel methodology combining remote sensing, machine learning, and terrestrial biosphere models to find that plants are indeed photosynthesizing more, to the tune of 12% higher global photosynthesis from 1982 to 2020. In that same time period, global carbon dioxide concentrations in the atmosphere grew about 17%, from 360 parts per million (ppm) to 420 ppm.

“This is a very large increase in photosynthesis, but it’s nowhere close to removing the amount of carbon dioxide we’re putting into the atmosphere,” said Berkeley Lab scientist Trevor Keenan, lead author of the study. “It’s not stopping climate change by any means, but it is helping us slow it down.”

Because carbon dioxide stays in the atmosphere decades longer than other greenhouse gases driving global warming, efforts to reduce it are critical to mitigating climate change. Plants, through photosynthesis, and soils sequester roughly a third of carbon dioxide emissions released into the atmosphere each decade from the burning of fossil fuels.

During photosynthesis, plants open tiny pores on their leaf surfaces to suck carbon dioxide from the air and produce their own food. To measure this photosynthetic activity, scientists can put a leaf in a closed chamber and quantify the dropping carbon dioxide levels in the air inside. But it’s far more difficult to measure how much carbon dioxide an entire forest takes up.

Through initiatives such as AmeriFlux, a network of measurement sites coordinated by the Department of Energy’s AmeriFlux Management Project at Berkeley Lab, scientists from across the world have built over 500 micrometeorological towers in forests and other ecosystems to measure the exchange of greenhouse gases between the atmosphere and the vegetation and soil. While these flux towers can help estimate photosynthesis rates, they’re expensive and thus limited in their geographic coverage, and few have been deployed long-term.

This explains why scientists rely on satellite images to map how much of the Earth is green and thus covered by plants, which allows them to infer global photosynthetic activity. But with rising carbon dioxide emissions, those estimates based solely on greenness become problematic.

Bringing history in the picture

Satellite images can capture the extra green to account for additional leaves plants put out due to accelerated growth. But they often don’t account for each leaf’s increased efficiency to photosynthesize. Also, this efficiency doesn’t increase at the same rate at which carbon dioxide builds up in the atmosphere.

Previous efforts to estimate how photosynthesis rates respond to increased carbon dioxide concentrations found widely varying results, from little to no effects on the low end, to very large effects on the high end.

“That magnitude is really important to understand,” said Keenan, who is also an assistant professor in UC Berkeley’s Department of Environmental Science, Policy and Management. “If the increase [in photosynthesis] is small, then we may not have the carbon sink we expect.”

So Keenan and his team of researchers took a new approach: they looked back at nearly three decades of carbon sink estimates made by the Global Carbon Project. They compared these with predictions from satellite images of the Earth taken between 1982 and 2012 and models using carbon exchange between the atmosphere and land to make carbon sink estimates.

“Our estimate of a 12% increase comes right in the middle of the other estimates,” he said. “And in the process of generating our estimate, it allowed us to re-examine the other estimates and understand why they were overly large or small. That gave us confidence in our results.”

While this study highlights the importance of protecting ecosystems that are currently helping slow down the rate of climate change, Keenan notes that it’s unclear how long forests will continue to perform this service.

“We don’t know what the future will hold as far as how plants will continue to respond to increasing carbon dioxide,” he said. “We expect it will saturate at some point, but we don’t know when or to what degree. At that point land sinks will have a much lower capacity to offset our emissions. And land sinks are currently the only nature-based solution that we have in our toolkit to combat climate change.”

The study was supported in part by NASA and the DOE Office of Science. Among the co-authors were Berkeley Lab postdoctoral fellows Nicholas Smith, Yao Zhang, Xiangzhong Luo, and Sha Zhou, all now at other institutions.