The study findings have potential applications for data storage in consumer products such as digital cameras, smartphones and laptops. 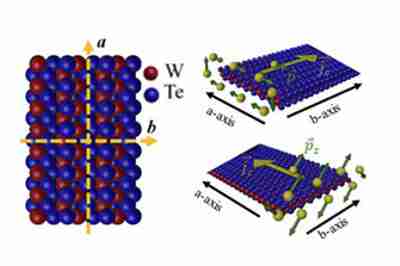 An illustration shows the unconventional charge to spin transduction in a quantum material with low-symmetry crystal structure. (Left) A model showing the crystal structure of WTe2, where a-axis and b-axis are labeled. The crystal is invariant (noninvariant) upon a bc (ac) mirror operation. (Top right) When a charge current (shown by yellow arrow) is applied along the b-axis, there is only in-plane component of spin polarization as shown by green arrows. (Bottom right) One the other hand, when a charge current is applied along the a-axis, there is an out-of-plane component of the spin polarization as shown by green arrows. This out-of-plane oriented spin current is used to switch the magnetization in this work.By Heidi Opdyk

When Carnegie Mellon University doctoral candidates I-Hsuan Kao and Ryan Muzzio started working together a switch flicked on. Then off.

Working in the Department of Physics' Lab for Investigating Quantum Materials, Interfaces and Devices (LIQUID) Group, Kao, Muzzio and other research partners were able to show proof of concept that running an electrical current through a novel two-dimensional material could control the magnetic state of a neighboring magnetic material without the need of applying an external magnetic field.

The groundbreaking work, which was published in Nature Materials in June and has a related patent pending, has potential applications for data storage in consumer products such as digital cameras, smartphones and laptops.

"What we're doing here is utilizing ultrathin materials — often the thickness of few atoms — and stacking them on top of each other to create high-quality devices," said Kao (right), who was first author on the paper.

"Spins and magnetism are everywhere around us," Singh said. "Atoms configure in a particular way on an atomic lattice that in turn dictates material properties. For WTe2, it has a low-symmetry crystal structure that allows us to generate a special kind of spin current by applying an electric field."

The way atoms are configured in WTe2 allows for an out-of-plane oriented spin current that in turn can be used to control the magnetization state of a magnet. Singh said that in order to switch the magnetic state (up or down) of most magnetic materials using spin current studied so far, a magnetic field is applied horizontally, or in plane. Having a material that can switch magnetism without the need of an external magnetic field can lead to energy-efficient data storage and logic devices.

The work could be applied to magnetoresistive random-access memory (MRAM) devices, which have the potential of realizing high-speed and densely packed data storage bits while using less power.

"People can do this already, you can take a material, apply an electric field to generate in-plane oriented spin current and use it to switch the magnetization from an up state to a down state or vice-versa, but it requires an external magnetic field," Muzzio (left) said. "What this boils down to is finding a material that has the intrinsic property that includes breaking symmetry."

Kao brought expertise on magnetism, while Muzzio understood how to build the devices as well as studies the behavior of electrons in material systems. To show that the behavior was reproducible, Kao and Muzzio created more than 20 devices over two years.

The simple devices are miniscule and allow a switch to either be turned in an up position or a down position, think of it like zeros and ones in binary, Kao said. While the devices could be 3-50 microns in length or width, the thickness is smaller than 1/200th of a human hair.

"We've just scratched the surface of what this material can do," Muzzio said. "There's so much more parameter space for us to explore and so many ways to utilize this material. This is just the beginning."

In addition to Kao, Muzzio, Singh and Katoch, co-authors on the paper "Deterministic switching of a perpendicularly polarized magnet using unconventional spin-orbit torques in WTe2" include Hantao Zhang and Ran Cheng of the University of California Riverside; Menglin Zhu and Joshua E. Goldberger of The Ohio State University; Daniel Weber of The Ohio State University and the Karlsruhe Institute of Technology, Germany; Jacob Gobbo, who graduated from CMU in 2020 and is a doctoral candidate at the University of California, Berkley; Sean Yan, a rising senior in physics at CMU; Rahul Rao of the Air Force Research Laboratory at Wright-Patterson Air Force Base; Jiahan li and James H. Edgar, both of Kansas State University; and Jiaqiang Yan of Oak Ridge National Laboratory and The University of Tennessee.