As the spacecraft prepares its next flyby, take a look back at the record-setting mission already considered by NASA to be a smashing success 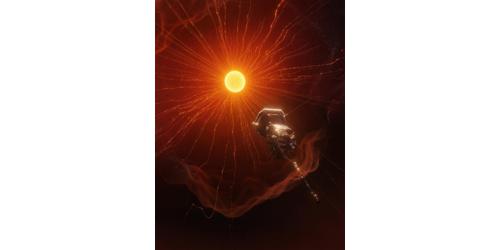 Nearly four years after launch, the Parker Solar Probe mission, managed for NASA by the Johns Hopkins Applied Physics Laboratory, has made unprecedented and significant inroads toward achieving its goals of tracing the flow of energy that heats the sun's outer atmosphere, shedding light on the sources of the solar wind, and exploring how solar energetic particles are transported and accelerated—enough so that NASA already considers the mission, only halfway through, a success.

But with its 12th close approach to the sun set to take place today, Parker Solar Probe continues to break records and capture first-of-its-kind measurements of the sun.

"Parker Solar Probe set out to revolutionize our knowledge of the sun in a way that no other mission had ever attempted," said Nour Raouafi, Parker Solar Probe project scientist from APL. "We have already made breakthrough discoveries in a region of the solar system that has never been explored by a spacecraft, and the best still might be yet to come."

Below are some interesting facts about NASA's historic mission to touch the sun.

In honor of Eugene N. Parker, eminent physicist who first predicted the solar wind, NASA announced in May 2017 that it would rename the Solar Probe Plus mission to Parker Solar Probe. Parker witnessed the spacecraft's launch in person and delighted in the discoveries made in the mission's few years. He died on March 15, 2022, at age 94, but as Raouafi said at the time, "Gene Parker has been a transformative figure in heliophysics and space research and will continue to live with us through his pioneering research."

The "solar probe" mission was conceived in 1958, but it took 60 years to develop the technology to make it happen. Designed, built, and now operated at APL, Parker Solar Probe is fortified to survive the scorching environs near a star—this includes a heat shield (known as the thermal protection system), autonomous onboard "smarts" to keep that shield facing the sun, and a novel, efficient cooling system that uses circulating water.

"Parker Solar Probe has exceeded expectations, performing much better in space and resulting in even greater science return than we anticipated. Less power degradation, better downlink rates, and temperatures below our prelaunch models all contributed to more flexible operations and made possible greatly enhanced returns," said Susan Ensor, the mission's deputy project manager from APL. "Our plan before launch was to gather science data only when the spacecraft was within 0.25 astronomical units—about 23 million miles—of the sun's center. But since launch, we have been able to keep instruments on for more than 75% of Parker's orbit around the sun, about eight times longer than expected."

"Parker Solar Probe performed extremely well during its first close approaches to the sun, and remains very healthy under increasingly strenuous conditions," said Nickalaus Pinkine, the mission operations manager from APL. "Based on the success of earlier orbits, the team is very comfortable extending the science operations to larger sections of each orbit and returning much more data to Earth."

Just a few months after launch, Parker Solar Probe became the closest human-made object to the sun, passing within 26.55 million miles of the sun's surface, and became the fastest human-made object to reach speeds of 153,454 miles per hour. Since then, it has repeatedly broken both of those records, and will reach a top speed of about 430,000 miles per hour as it flies to within 3.9 million miles of the sun's surface in 2024.

In December 2021, NASA announced that Parker Solar Probe had achieved its cornerstone objective: making the first measurements from within the atmosphere of a star, effectively becoming the first spacecraft to "touch the sun."

The mission has led to game-changing discoveries

Parker Solar Probe carries four instrument suites, and each is credited with several groundbreaking discoveries. Here's a quick look at some of them:

The Solar Wind Electrons Alphas and Protons investigation, or SWEAP, is responsible for sampling the solar atmosphere. During its first pass close enough to cross the boundary where solar material anchored to the sun first escapes and becomes the solar wind—known as the Alfvén critical surface—the probe recorded key information about the boundary's shape and discovered that rather than resembling a smooth ball, the Alfvén critical surface is wrinkled with spikes and valleys. SWEAP established that the wrinkles stemmed from coronal streamers—giant plumes of solar material rising through the sun's atmosphere. Streamers have long been observed by sun-watching spacecraft near Earth, but have never been measured directly. "The results are reshaping what we know about the sun's atmosphere and how it transforms into the solar wind," Raouafi said.

The Wide-Field Imager for Parker Solar Probe, or WISPR, is discovering the dust-depletion zone, a region around the sun where scientists predict that dust particles should get hot enough to sublimate and thus disappear. The WISPR instrument observed light reflected from dust dimming at about 19 solar radii (8.2 million miles from the sun). Models of the results suggest that a dust-free zone should exist starting at about 5 solar radii (2.2 million miles from the sun). "Discovering the dust-depletion zone around the sun is not only historical, but also insightful on the environment near of the sun and other stars," said Mark Linton, WISPR principal investigator from the Naval Research Laboratory.

FIELDS is tracking down the origins of switchbacks, rapid reversals in the sun's magnetic field that reverse direction like a zig-zagging mountain road. During the probe's sixth flyby of the sun, FIELDS data revealed that the switchbacks aligned with magnetic "funnels" in the solar surface. These funnels emerge from between structures called supergranules—giant bubbles on the sun in which hot plasma from the solar interior rises up, spreads out across the surface, cools, and then sinks back down. The magnetic geometry of these regions suggests that magnetic reconnection powers the solar wind. But while the findings locate where switchbacks are made, researchers are still digging into the question of how they're formed.

The Integrated Science Investigation of the sun, or ISʘIS, is rewriting the book on solar energetic particles, the most energetic particles that escape the sun. Measured near Earth, SEP events are relatively rare and hard to predict. But detecting SEPs close to the sun, ISʘIS has found that SEPs are much more common than expected, that they contain a wider range of types of particles than expected, and that their paths from the sun are not as direct as previously thought—they can be disrupted by the switchbacks and can at times follow a path twice as long as expected. By measuring these events so close to the sun, ISʘIS is detecting events so small that all trace of them is lost before they reach Earth, helping scientists develop a fuller picture of where they come from and how they're accelerated away from the sun.

…And the results keep coming

Each new data set expands the limits of space science—and it's not just about the sun. Parker Solar Probe has also studied comets, detected radio emissions from Venus' atmosphere, and even captured the first-ever images of Venus' surface in visible wavelengths.

With its closest passes of the sun still ahead in 2024 and 2025, only time will tell what new discoveries await.

"The Parker Solar Probe mission is not only reshaping the landscape of solar and heliophysics research before our eyes, but it is enticing us to pursue challenging ideas that, just a few years ago, we considered out of reach," said Raouafi. "I can't say enough about the exemplary team of scientists, engineers, and managers at NASA, APL, and our partner institutions who have made this mission a success. We're excited about the future of Parker Solar Probe and the opportunity to inspire missions that will follow its path."