Researchers have developed new DNA biosensors capable of rapidly detecting and differentiating between parasites that cause schistosomiasis. 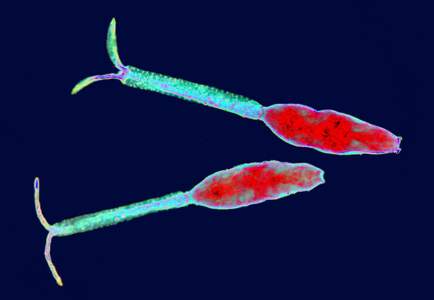 Larval forms of the parasitic worms that cause schistosomiasis. Image: Shutterstock

Schistosomiasis is a debilitating neglected tropical disease caused by parasitic worms. It is endemic to regions within Africa, Asia and South America, and has also become established on the island of Corsica, France.

People become infected when freshwater snails release larval forms of the parasite, called cercariae, which then penetrate the skin during contact with infested water.

Globally, 250 million people are currently living with the disease and a further 779 million are at risk of infection. Schistosomiasis has an annual mortality rate of 280,000 people in sub-Saharan Africa alone.

Now, an international team of researchers at Imperial College London, the National History Museum, Addis Ababa University in Ethiopia and the National Institute for Medical Research (NIMR) in Tanzania have developed new DNA biosensors capable of rapidly detecting and differentiating between species of parasitic worm that cause schistosomiasis.

The new findings, published in the journal PLOS Neglected Tropical Diseases, suggest that the biosensors could be used as part of strategies to tackle the impact of schistosomiasis at both a global and a local level.

Over the past 20 years, the main approach used to control schistosomiasis has been the mass administration of the drug praziquantel to treat infection. Other measures have also been introduced, including water, sanitation and hygiene (WASH) interventions, and snail control to reduce transmission. However, these approaches can sometimes be difficult to implement in the low- and middle-income countries (LMICs) where schistosomiasis is most prevalent. Furthermore, recent studies have indicated that different treatment approaches are required depending on which species of parasitic worm – called schistosomes – are causing infection.

In addition to impacting human health, schistosomiasis can also affect animals, causing considerable damage to cattle and other livestock and negatively impacting local economies and food security. However, gathering soil and water samples, or undertaking human or veterinary surveys to detect transmission of the disease, can be both time- and labour-intensive.

With these challenges in mind, the team behind the current study worked as part of the Water Infrastructure for Schistosomiasis-Endemic Regions (WISER) project to develop a new, more efficient approach to detecting and differentiating between schistosomes in water and soil.

Nucleic acids, such as DNA and RNA, are naturally occurring chemical compounds that serve as the primary information-carrying molecules in cells.

The biosensors use carefully designed probes that recognise species-specific DNA sequences, coupled with enzymatic amplification steps, and a fluorescent signal-dye to indicate a positive detection.

The team’s data indicate that the probes can rapidly detect and differentiate between Schistosoma mansoni and Schistosoma haematobium – which cause most cases of human disease in Africa – and discriminate these schistosomes from other closely related species.

Researchers were also able to successfully detect DNA samples collected in the field from Africa and Asia. The findings suggest that the biosensors could be used as part of future global health programmes for schistosomiasis in LMICs.

Moving forward, the team will continue to refine the biosensor probe designs to improve their specificity as new DNA sequences become available.

“The biosensors’ design relies on the availability of genomic sequences (either previously published or obtained by us and our collaborators), and for some related species, the sequence variability is very slight between them. Therefore, more biosensor design iterations will improve species specificity of the biosensor,” explains Dr Alexander Webb, joint first author of the study and Research Associate at Imperial’s Department of Infectious Disease.

“We are also exploring ways to further reduce the cost per sample of the biosensor by using automated workflows to simplify the assay and reduce reagent and plastic usage."

He adds: “We are currently testing versions of our biosensor probes to detect drug resistance markers in schistosomes and already have significant preliminary data which we hope to publish soon in collaboration with the National History Museum.”