A handheld color-sensing tool, commonly used to match paint shades, is also effective at quantifying the iron content in soil by analyzing its color, a study finds 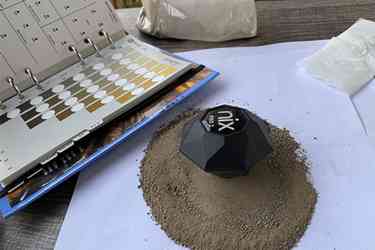 The Nix Pro soil sensor is a handheld device that is more automated and user-friendly for measuring soil iron content than a book of color samples known as the Munsell charts.

A handheld color-sensing tool, commonly used to match paint shades, is also effective at quantifying the iron content in soil by analyzing its color, a study finds. Agricultural & Environmental Letters published the research showing that the inexpensive color sensor, known as the Nix Pro, can rapidly and accurately quantify soil iron.

“We found that the Nix Pro is easy to use in the field on soil samples and can give an accurate estimate for iron content within seconds using a technique that we developed,” says Debjani Sihi, corresponding author of the paper and assistant professor in Emory’s Department of Environmental Sciences. “We think that this device holds the potential to become a really handy, cost-effective tool for farmers. “

Gaurav Jha, who did the work as a post-doctoral researcher at the University of California, Davis, is first author of the study.

Iron is a vital micronutrient, explain Sihi, a biogeochemist who studies environmental and sustainability issues at the nexus of soil, climate, health and policy. Just as people need iron to make a protein in red blood cells that carries oxygen through the body, plants need iron to move oxygen through their systems and produce the chlorophyll that makes them a healthy, green color.

And yet, iron is often deficient in soil, especially in agricultural lands. “If a farmer knows that their soil does not contain the right amount of iron for their crops, they can amend the soil before planting,” she says.

Problems with testing for soil iron

The problem farmers face is that determining iron content in soil is expensive and/or time consuming.

One method is to gather soil samples from across a landscape. The samples are then sent to a laboratory for analyses via a benchtop atomic-absorption spectrometer or inductively coupled plasma. Laboratory analysis yields a precise percentage of iron content for each sample but it can be costly and often requires weeks to learn a result.

A thick book of soil color samples, known as the Munsell charts, provides an alternative. Comparing the color of a soil sample with the swatches on the Munsell charts can guide an effort to classify the soil color. The downside to this method is that it requires practice, it is labor-intensive and the data is qualitative and imprecise.

During a coffee break chat among Sihi, Jha and co-author Biswanath Dari, from North Carolina Agricultural and Technical State University, the idea came up of trying the Nix Pro’s color sensing on soil.

The Nix Pro is a palm-sized light-emitting spectrometer that measures the reflectance of a surface to quantify its color composition. It’s commonly used by paint stores, printing shops and graphic design firms for color matching. A Nix Pro costs just $349 and is easy to use, with a cell phone app providing a near-instantaneous result for a sample.

“The color of soil can tell you a lot of stories about an environment,” Sihi says.

If researchers want to learn about the water table in red clay soil, they can look at the colors in a cross-section of the ground. Past flooding will turn some of the soil layers from red to a grayish color because the water has washed out much of the iron. Tree roots from the past will appear as orange patches.

“The orange color indicates where the tree roots borrowed oxygen from the surrounding air and oxidized the iron,” Sihi says.

Sihi studies redox reactions involving electron receptors like oxygen and iron, which can reveal such hidden stories in an environment. Ferrous oxide, for instance, is known as iron 2 due to the number of electrons lost in the oxidation process. Ferric oxide, or iron 3, contains iron oxide that lost three electrons.

Soil oscillating between periods of heavy rain to no rain undergoes fluctuating redux, or shifts in the levels of iron 2 and iron 3 as the water tables go up and down. “Fluctuating redox is a big threat multiplier for greenhouse gas emissions into the atmosphere,” Sihi says.

Due to the broad importance of iron, the researchers focused on iron content as the first soil test for the Nix Pro. They first collected data on soil samples from New Mexico using the Nix Pro app for three different color spaces: cyan, magenta, yellow and black; lightness and darkness; and red, green and blue. The Nix Pro app allowed them to export the data into an Excel document.

Researchers from New Mexico State University helped calibrate and validate the three color models generated by the Nix Pro data by comparing them with results for total iron content generated through analysis in a NMSU laboratory. The results showed that all three of the models were significant in predicting soil iron content, with the cyan, magenta, yellow and black model (CMYB) delivering the strongest result.

Finally, they further validated the CMYB model by using it to estimate total iron content in soil samples from an adjacent field. The results showed that the Nix Pro CMYB model was 80 percent accurate compared to laboratory results for the same samples.

“That’s an extremely strong result,” Sihi says. “We’re comparing the power of a small, handheld tool with a really fancy lab instrument and it’s holding up.”

The team now plans to test the Nix Pro on soils from other regions to determine if the method will work universally as an iron soil predicter. They hope other researchers will also apply their method to speed up the data-gathering process. Sihi and her colleagues plan to further expand their project by experimenting with the Nix Pro’s possible efficacy for other agricultural applications related to soil composition. And this summer, they will conduct a greenhouse gas experiment to evaluate if the Nix Pro color sensor can be used to identify nitrogen deficiency in corn plants through the characteristic symptom of yellowing leaves.