The findings have implications for designing bio-inspired extremely sensitive microphones for use in hearing aids and cell phones. 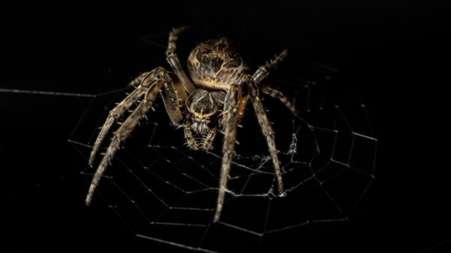 An orb-weaver spider perched in the hub of its wheel-shaped web. The “claw” at the tip of each leg is “hooked” gently onto strategically placed strands of web silk and positioned to “listen” to the miniscule vibrations induced by sound waves that pass through the web.

Charlotte’s web is made for more than just trapping prey.

In experiments, the researchers found the spiders turned, crouched or flattened out in response to sounds, behaviors that spiders have been known to exhibit when something vibrates their webs.

The paper, “Outsourced Hearing in an Orb-weaving Spider That Uses its Web as an Auditory Sensor,” published March 29 in the Proceedings of the National Academy of Sciences, provides the first behavioral evidence that a spider can outsource hearing to its web.

The findings have implications for designing bio-inspired extremely sensitive microphones for use in hearing aids and cell phones.

“The individual [silk] strands are so thin that they’re essentially wafting with the air itself, jostled around by the local air molecules,” said Ron Hoy, the Merksamer Professor of Biological Science, Emeritus, in the College of Arts and Sciences and one of the paper’s senior authors, along with Ronald Miles, professor of mechanical engineering at Binghamton University.

Spiders can detect miniscule movements and vibrations via sensory organs in their tarsi – claws at the tips of their legs they use to grasp their webs, Hoy said. Orb weaver spiders are known to make large webs, creating a kind of acoustic antennae with a sound-sensitive surface area that is up to 10,000 times greater than the spider itself.

In the study, the researchers used a special quiet room without vibrations or air flows at Binghamton University. They had an orb-weaver build a web inside a rectangular frame, so they could position it where they wanted. The team began by putting a mini speaker within millimeters of the web without actually touching it, where sound operates as a mechanical vibration. They found the spider detected the mechanical vibration and moved in response.

They then placed a large speaker 3 meters away on the other side of the room from the frame with the web and spider, beyond the range where mechanical vibration could affect the web. A laser vibrometer was able to show the vibrations of the web from excited air particles.

The team then placed the speaker in different locations, to the right, left and center with respect to the frame. They found that the spider not only detected the sound, it turned in the direction of the speaker when it was moved. Also, it behaved differently based on the volume, by crouching or flattening out.

Future experiments may investigate whether spiders rebuild their webs, sometimes daily, in part to alter their acoustic capabilities, by varying a web’s geometry or where it is anchored. Also, by crouching and stretching, spiders may be changing the tension of the silk strands, thereby tuning them to pick up different frequencies, Hoy said.

Additionally, the team would like to test if other types of web-weaving spiders also use their silk to outsource their hearing. “The potential is there,” Hoy said.

Miles’ lab is using tiny fiber strands bio-inspired by spider silk to design highly sensitive microphones that – unlike conventional pressure-based microphones – pick up all frequencies and cancel out background noise, a boon for hearing aids.