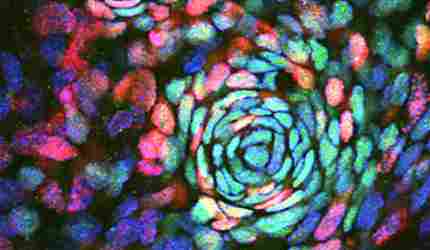 In a new study, Yale researchers take a unique approach to identify the molecular signals that induce a critical trigger for hair follicle formation and regeneration.

The findings could prove crucial for developing new therapies to re-grow hair — and provide a blueprint for unraveling other mysteries of tissue growth at the cellular level.

“This is a decades-old problem that has been unsolvable because formation of the dermal condensate, the signaling center that induces the growth and differentiation of hair follicles, has been difficult to visualize and capture due to how rapidly they form,” said Dr. Peggy Myung, associate professor of dermatology at Yale School of Medicine and senior author of the new study in the journal Developmental Cell.

Unraveling the steps that induce DC formation has been a major challenge for researchers, because the process is difficult to track over time and tease apart experimentally. Overcoming this barrier, the researchers said, could open the door to effective methods for reproducing DCs to test new drugs for hair loss and to generate hair follicles in 3D culture models.

For the study, Myung and her colleagues, including Yuval Kluger, a professor of pathology at Yale who is affiliated with the university’s applied mathematics program, took a unique approach to study DCs.

Using single-cell RNA-sequencing data from mouse skin, they designed a computational approach to align a series of single-cell profile “snapshots” to reconstruct the time course of DC development. This provided a roadmap that delineates how an immature dermal cell drives itself to maturity. More importantly, the approach allowed the researchers to investigate the molecular signals that serve as engines in the process. By combining their computational findings with in vivo genetic experiments, they were able to pin down the critical signals involved in DC formation.

“We show there are two determinant signals that drive the process,” Myung said. “Interestingly, these are signals that are typically thought to oppose each other, but in this case, they cooperate to induce the process of DC genesis.”

One of the signals is known as Wnt and the other is called “sonic hedgehog,” or SHH. Both signals are considered essential in the development of many tissue types and play a role in regulating adult tissue homeostasis and regeneration. They are also implicated in pathological states such as cancer when they are aberrantly overactivated.

For the study, the researchers were able to genetically modulate these signals to curtail the speed of DC formation, effectively playing out the DC formation process in slow motion.

“This work will help pave the way to developing robust methods for recreating DCs in the laboratory, and for adult hair follicle regeneration,” Myung said. “It also shows how computational methods can be used to understand signals and cell behaviors that were previously impossible to capture.”

The study’s first author is Rihao Qu of Yale. Co-authors of the study are Danni Dong, Yiqun Jiang, Boris Landa, Charles Saez, Gwendolyn Strickland, and Pei-lun Weng, all of Yale; Khusali Gupta of the University of Massachusetts; Jonathan Levinsohn of Children’s Hospital of Pennsylvania; and M. Mark Taketo of Kyoto University.

Myung and Kluger are also affiliated with the Yale Cancer Center.